A large mobile self-erecting tower crane has gone over in Uitikon on the west side of Zurich, Switzerland yesterday.

The crane – one of a fleet of mobile tower cranes owned and operated by Flück Zurich- was apparently lifting a pallet load of glass panels when it lost stability and tipped over onto the new apartment block it was working on. No one was injured in the incident, with damage restricted to the crane and part of the building.

The overturn may have been caused by outrigger set up?

It looks as though the crane may have slipped off of its cribbing although this may well have occurred after it tipped? We will update this if and when we receive more information. 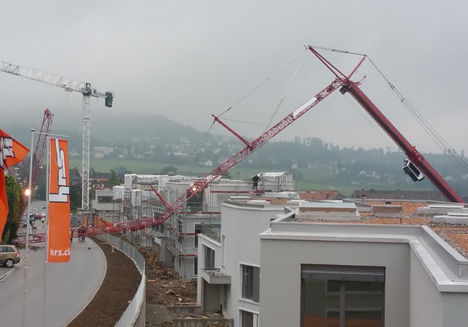 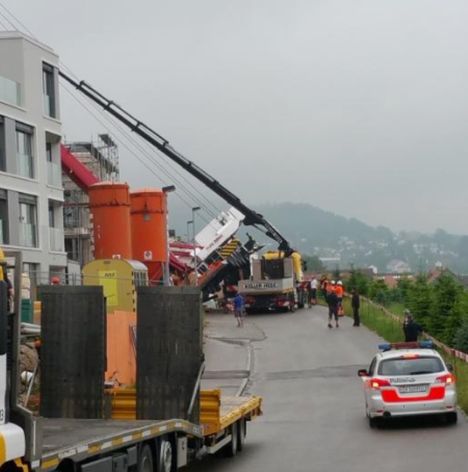 The recovery seems to have involved a long boom loader crane.

A reader writes in;

Those of us who follow this forum daily are seeing many accidents that seem to be caused by human error rather than wrong choice of equipment or equipment breakdowns. Last week a young man was crushed after another worker hammered out a large support pin of a crane assembly. For a long while Vertikal posted a poll in the right margin of the web site asking if a ground supervisor, banksman or other person designated to oversee a job should be utilized on every lift. The screams by those who must bury the dead and meet the costs and settle insurance claims. Our industry needs a rude awakening and time for a cool change…to save lives equipment losses and job deliveries. We need more people to scream through their writing their lectures their orientations and delivery of sold equipment.