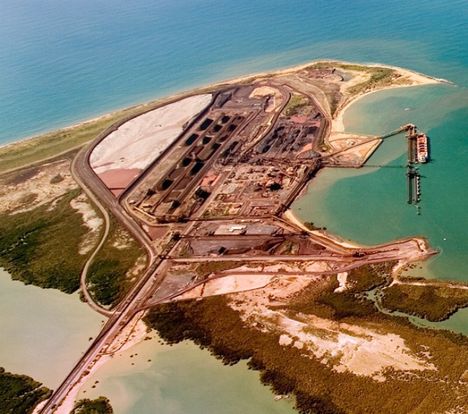 A fatal crane accident at BHP Billiton’s iron ore operations at Port Hedland in Western Australia’s Pilbara region has suspended operations at the facility while an investigation is carried out.

We have no details on what type of crane was involved or what exactly happened, we have though been informed that it was a mobile crane belonging to Boom Logistics. The incident, which involved a 27 year old Jordan Marriott-Statham, who worked for conveyor company Fenner Dunlop, occurred on Finucane Island an ore loading facility situated to the west of the port.

It is one of two loading points used by BHP at Port Hedland, the other being Nelson Point across the harbour from Finucane.

A spokesman for the South Hedland police that the man was crushed just after midnight when a loaded crane collapsed and fell on him. He was standing on a small platform at the time.

A statement from the company gave few details but said: “The onsite emergency team has been activated and external emergency services including police are attending the scene. At this stage we are unable to provide any further details about the incident, but will do so as soon as possible during the day.”

In addition to a few details added into the original report we do now have statements issued by BHP Billiton and Fenner Dunlop, where are as follows:

BHP Billiton’ s vice president external affairs WA, Ian Fletcher said: “The company is deeply saddened by this tragic incident and is working closely with Fenner Dunlop, Boom Logistics, the police and the Department of Mines and Petroleum to investigate the incident and establish further details. Our highest priority at this point is the welfare of the family and the safety of the people involved in the incident.”

Fenner Dunlop executive director, David Landgren added: “Our thoughts are with Mr Marriott-Statham’s family in Port Hedland and his colleagues. We express our deepest condolences to all members of Jordan’s family, his friends and his colleagues at this extremely difficult time. We are providing access to counselling and appropriate support services to all those affected by this tragedy.”

Climbing as it should be done