A crane overturned on Monday on the site of a new court house in Thunder Bay, Ontario, Canada.

The crane, a Grove RT890 Rough Terrain crane owned by local company GC Rentals, was lifting a load on full boom and swingaway when it appears the ground gave way under one of the outriggers. 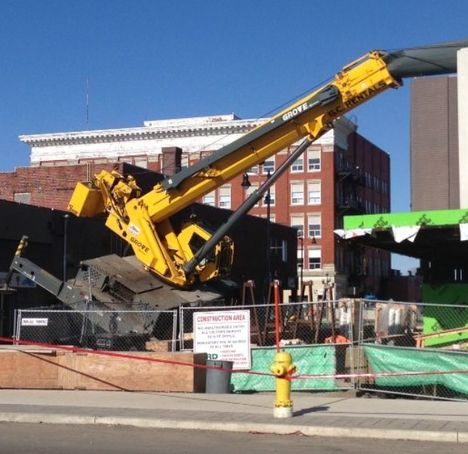 The crane boom came down on the roof

The boom came to rest on the roof of the new building but was buckled badly by the impact and shock loading. Thankfully no one was injured. 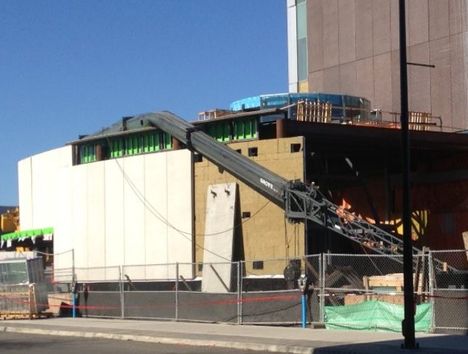 The badly buckled boom is certainly written off

A spokesman for the labour ministry said that the contractor, the Plenary Group, has been issued with several orders, which include evaluating the condition of the ground that the crane is standing on. ”There’s a stop-work order on the area until they provide a soil-testing compaction report and a plan on ground stability for the placement of the crane outrigger pads,” he said.

The ministry has also demanded that the company submit all documents such as crane records, crane operator qualification certificates, drawings, information on any material that the crane was lifting and a structural engineering report on the stability of the building where the crane landed. 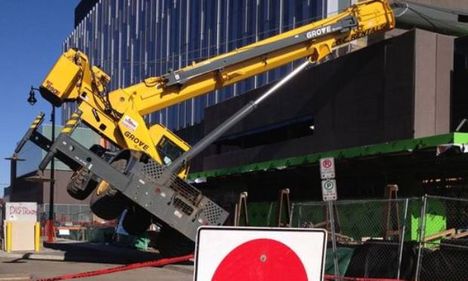 It looks as though the ground gave way under an outrigger

The RT 890E has a 43 metre five section main boom so in total around 53 metres of stick was out when the crane tipped.