Iowa City firefighters and crews with Mortenson Construction teamed up for a very real drill late Tuesday morning. Firefighters used a tower crane to simulate a high angle rescue some 200 feet over Iowa City at the corner of Burlington and Clinton Streets.

“It’s something we always need to be sharp on,” said Capt. Zach Hickman.

“It’s important everyone be ready for this,” said Jason McKane, a project manager with Mortenson Construction. With nearly a dozen tower cranes right now towering over Iowa City, Hickman said firefighters have been given a unique and important opportunity to stay current on this type of rescue. Mortenson Construction invited the firefighters onto their site, the future UI School of Music, as part of a national “safety week” effort. 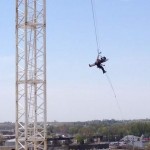