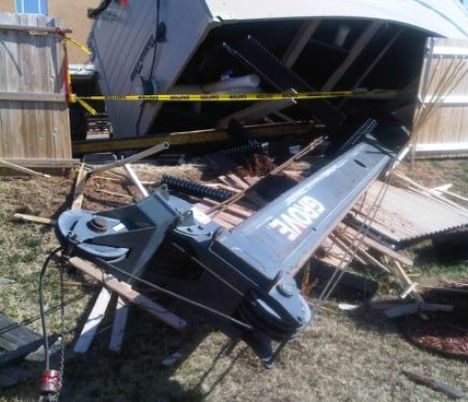 We have new information about the company operating the crane that tipped over Wednesday at Deaconess Hospital. The crane was removing a cooling tower from the hospital roof when it tipped and slammed into some cars. It came to rest in a backyard after missing power lines and crashing through a fence. No one was hit or hurt in the process.

After reviewing safety records, it turns out this is not the first accident involving the company operating this crane.  Rent-A-Crane was involved in a fatal accident on the Chesapeake campus in 2010.  Michael Parsons, 42, was killed when something fell off a crane there.

OSHA also listed Rent-A-Crane as a company cited in a crane accident death in Dallas in 2007.  Rent A Crane released this statement Thursday afternoon:

“The incident that occurred yesterday at Deaconess Hospital is under investigation and the company is not able to comment at this time. With respect to the unfortunate accident that occurred in 2010 in Oklahoma City, the Rent-A-Crane family was deeply saddened by the loss of Michael Parsons, who was a highly qualified crane operator and valuable employee. Contrary to recent news reports, while litigation has been filed, Rent-A-Crane is not a party to that litigation and has not been sued. Rather, Mr. Parson’s estate and another injured employee claim, among other things, that the accident was caused by a defective crane design and inadequate warnings. Rent-A-Crane remains 100 percent committed to a safe working environment for its employees and customers.” – Ryan Leonard, attorney for Rent-A-Crane of Oklahoma, Inc.

We do not know if the crane operator in Wednesday’s accident was certified or not, but most companies do require the certification for their employees even though the state does not yet demand it.