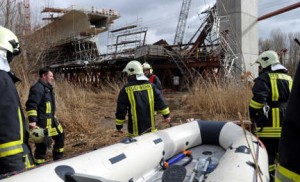 A crane and 1,000-tonnes of scaffolding collapsed at a construction site south of Halle on Wednesday morning, temporarily trapping several workers and injuring 11 people, police said.
The accident occurred around 10:30 am along a stretch of a new high-speed ICE Erfurt-Halle/Leipzig train line in the state of Saxony-Anhalt between Halle and Döllnitz. Workers there are building an 8,600-metre bridge over a floodplain there.

According to the police, five workers were rescued with minor injuries while another six workers were trapped beneath the wreckage for some time before rescue services were able to dig them out.