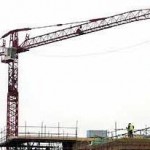 GILLETTE, Wyo. — Officials say there were no serious injuries in a crane accident at the Dry Fork power plant construction site in Campbell County.

Basin Electric Construction Manager Tom Stalcup says a crane boom broke Monday morning while working on a coal silo east of the Dry Fork mine. He says the crane wasn’t loaded when the boom broke.

Stalcup says one worker sprained his ankle as he left the area.

Stalcup says cranes are checked daily before use. There are 12 cranes on site and about 1,050 workers.

Basin Electric hopes to complete construction of the 385-megawatt Dry Fork plant by 2011.

The accident is under investigation by Basin Electric, representatives of the contractor operating the crane, and the Mine Safety and Health Administration.

Written By: The Associated Press

Direct link to the article.