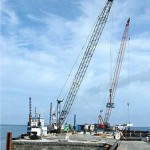 Not Actual Photo or Location

Paul Thomas Rysz Jr., 33, a life-long resident of Norwalk, was apparently struck in the head with a steel pin used to secure heavy steel rods at the mouth of the creek on June 26. At the time of the accident, Rysz’ crew was using a crane to pull an assembly of rods, cables and pins that are pushed into the river bottom to hold the barge in place.

Rysz was an employee of Norwalk Marine Contractors, which specializes in projects that involve marine pile-driving. It has been in business since 1985, according to the company’s website.

Assistant Fire Chief George Gomola said at the time of the accident that Rysz was apparently either trying to insert or remove a pin from the assembly when it twisted, sending a pin toward the victim’s head. Rysz fell into the creek after being struck by the pin, and was taken first to Bridgeport Hospital. He later was taken to Yale-New Haven Hospital where he died last Friday.

An investigation into the accident has been launched by several public health and safety agencies.

Rysz was engaged to Claire Iannacone, according to a death notice published Monday. He also was survived by his parents, Paul T. and Kathleen Rysz of Norwalk; and two brothers, Thomas and Timothy. He was a member of United Brotherhood of Carpenters and Joiners, Local 210, based in Norwalk, and was a member of the Norwalk High School Class of 1993.

A wake for Rysz will take place Tuesday, from 5 to 8 p.m., in the Magner Funeral Home, 12 Mott Ave., Norwalk. The funeral and burial will be private.

In lieu of flowers, the family asks that memorial donations be made to the Newtown Scholarship Association, Janice Rysz Fund, P.O. Box 302, Newtown, CT 06470

Direct link to the article.