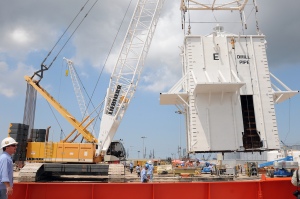 PORT FOURCHON, La. — What British Petroleum calls the best short-term solution to stopping the gush of oil, still leaking out of control into the Gulf of Mexico, was expected to leave Port Fourchon late this afternoon.

Crews loaded the 100-ton, 40-feet high steel and concrete box on to a supply boat. BP is hauling it 50 miles offshore in the hopes of bottling up the oil, now spewing more than 200,000 gallons of crude oil a day.

Chemical dispersants are also being sprayed on the wellhead to break up oil before it hits the surface.

BP is hoping to drop the oil containment system on top of one of the two remaining leaks.

“It will actually seal over the leak and then we’ll engineer piping that goes up to a barge and we’ll be able to funnel that oil that is escaping now,” said BP spokesman Curtis Thomas.

BP hopes to guide the containment boxes down to the underwater leak with remote submarines.

New Orleans engineer Sam Scandaliato said working in 5000 feet of water will be difficult. “I think the trick is getting over that hole,” said Scandaliato. “That’s like looking for a needle in a haystack. Although they know where the needle is, they got to get it through this mile of water.”

New Crane Regulations May Save Lives