Expert’s in custom heavy lifting equipment, Modulift proved themselves again with their latest venture, assisting Harland and Wolff in optimizing their single point lifting capacity from the world renowned Samson gantry crane, and broke two world records in the process. 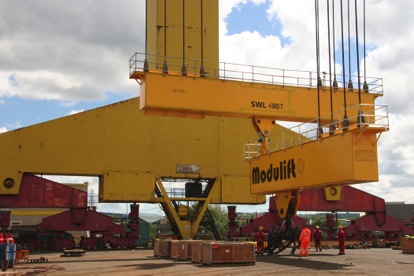 This mammoth feat, the ability to lift 700t from one lifting point, was required for lifting a steel structure jacket section of an oil rig, part of the new wave of business Harland and Wolff’s shipyard now has the capability to manage for their customers.

This project began in 2010 when Modulift supplied the first tandem lifting beam used in this long term project. The initial phase enabled Harland &Wolff to join up two gantry crane hooks, resulting in a load capacity of 500t. Four years later the original beam is being hooked up alongside an additional custom-made Modulift tandem lifting beam, bringing the third gantry crane hook into play to achieve the target of 700t.

The beam configuration was tested using 22 water filled bags and by doing so achieved a world record in heavy lifting capacities for non-fixed lifting beams.

Modulift‘s Operations Director and Head of Engineering, Sue Caples watched the lift in anticipation, “As far as we are aware, this is the heaviest capacity non-fixed lifting beam in existence. It was a unique challenge for Modulift to design a beam to link up with the existing beam which was third party approved by verification company DNV GL, who are synonymous with lifting approval for the oil and gas industry. Modulift also provided the slings and an 800t 8 metre Spreader Beam to carry the two lines of water bags for the proof load test. We are very pleased to have been involved with this milestone project, and be party to the world record water bag test carried out by Seaflex.”

Modulift’s Mechanical Design Engineer Anthony Culshaw was instrumental in the designing and planning of this milestone lift and was in Belfast for this unique occasion and said “This project did not only have the challenge of designing and engineering one of the largest non-fixed beams in the world, but it meant that we also had to ensure that the loads on each of the three gantry hoists were as balanced as possible. This would maximize the capacity of Harland and Wolff’s single point lifting capability, and make the best use of the beam and crane.”