The lift took place at Korea Petrochemical Ind’s plant in Ulsan. The 92m-tall tower was lifted with just 15m of space; a feat that would not have been possible without the help of the VPC system, according to Chunjo.

“Any other crane would have taken eight hours to complete this lift, but we did it in just three,” said Jang Hwan Chang, chairman of Chunjo Construction. 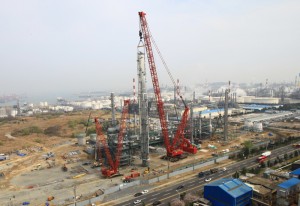 “No other crane would be able to come close to that timeframe. Manitowoc’s flagship crawler crane overcomes the most challenging and costly lifts, and brings a fresh approach to construction challenges. We are delighted to see it perform. Each lift is getting bigger and we have more jobs lined up that will change the game in terms of what’s expected from high-capacity cranes,” he added.

By using the Manitowoc 31000 in its VPC configuration, Chunjo was able to avoid a significant amount of time-consuming and costly work. For example, a conventional crane would have had to lift the tower in two sections. Scaffolding would have been required and the river near to the job site would have needed to have been filled so that a wheeled counterweight trolley could be carried to the jobsite.

However, as the 31000’s VPC system is suspended above the ground, it negates the need for a wheeled counterweight trolley. Not only did this mean that the lift was able to take place within a space of just 15m, but it also saved time and money in terms of ground preparation.

In order to lift the 670t wash tower, the Manitowoc 31000 received support from a smaller 18000 unit. Chunjo Construction runs a fleet of 115 Manitowoc-family cranes, including the firm’s eponymous crawler cranes, its Potain-branded tower cranes, and its Grove-branded mobile cranes.