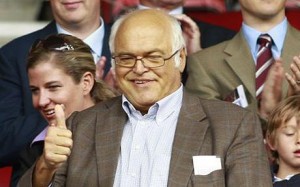 Southampton, known as the Saints, had suffered several years of decline when Liebherr, previously unheard-of in Britain, emerged as a buyer in July 2009. The club had just been relegated from the Football League Championship to League One, having suffered a 10-point deduction because its parent company had gone into administration.