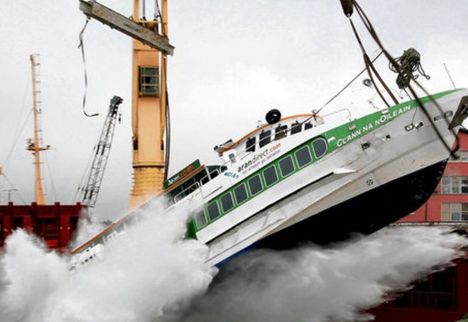 A large boat being loaded onto a larger ship in Galway harbour, Ireland, was dropped yesterday after the lifting slings broke. Three men were taken to hospital with minor injuries.  The boat, the Clann na nOileain, built for the Aran Island run, was around 11 metres in the air when the slings broke or slipped, dropping its stern into the water. A minute or two later and the boat would have been over the Danish cargo ship – the Thor Gitta and the men who would have been guiding it in the ships hold.

The boat is one of two ‘sister’ ferries built for the new Aran Islands service, that have been sold to a company in Mauritius following the bankruptcy of the Irish company that had them built. A ship carrying the other ferry –the Clan Eagle 1- ran aground last week in Casla Bay off Rossaveal and is awaiting repair before continuing on to Mauritius.

Rigging and sling failure in harbours appears to happen way too frequently, and all too often when loading unusual loads, such as medium sized boats such as this one – or mobile cranes – (see our video section).

There really is no excuse for such failures. Modern good quality slings are excellent and as long as looked after and maintained will very very rarely fail.

Accidents such as this are invariably caused by poor slinging/rigging caused possibly by an over familiarisation by staff who one has to assume lack the in depth training to sling such loads?

Given the dangers of falling loads, not to mention the costs, this is an area that the evidence suggests needs to be tightened up