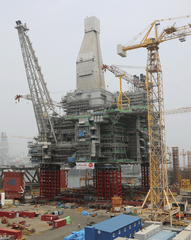 At 42,780 tonnes the topside is the heaviest load ever lifting in a jacking operation. The massive piece will be in the Arkutun Dagi field off the east coast of Russia. Arkutun Dagi is the third field in the Sakhalin-1 Consortium’s development. It is forecast that the development will be the largest oil and gas production platform in Russia. Oil production is due to start in 2014.

ALE jacked the topside to a height of 24 metres in what is the first project of this kind for the UK-based company’s Mega Jack system. The Mega Jack was configured in four sets of towers, each one a combination of three towers, giving a capacity of 15,000 tonnes on each of the four corners for a total overall of 60,000 tonnes. Mega Jack is a computerised and stroke-controlled system operated via a control room. It took 11 hours to complete the 24 m lift. A maximum wind speed of 50 m/s was encountered during that time.

After the initial jack up operation, the next phase of work included the installation of a skid frame (DSF), onto which the topside was lowered using the Mega Jack. This operation was completed within a day, ALE said. The next phase will see the topside loaded out onto the DSF in a pulled load out operation, using strand jacks, to a barge for onward transportation to its final destination. In water 35 m deep about 25 km off the coast, the 10 storey tall topside will be installed on its base, a 130 x 100 m concrete gravity based structure (GBS).

Kees Kompier ALE executive director, comments, “This pioneering project is a great achievement for ALE and the Mega Jack which was created by our research and development team and engineers. The load is nearly double the weight of the previous heaviest load which is a great accomplishment for the company and really shows the capabilities of the Mega Jack. The system itself opens up a whole range of options for our clients and is completely scalable, meaning we can create a system to fit the requirements of projects becoming more flexible in our capacity and solutions.”

The Mega Jack establishes stability from its jacking foundation. As a result enormous bracing structures and welding works to the platform for securing stability are unnecessary. It means that welding and cutting works at high level are not required and, therefore, working at height is completely eliminated due to the low level feed-in system for inserting the jacking beams as the Mega Jack operates.

From the central control unit the jack-up operator runs the system via the computerised control system which includes data logging, weather data and optional dimensional surveys.

ALE launched Mega Jack in 2011. It can be configured to lift up to 60,000 tonnes to a height of 25 m and was developed to meet increasing demand from the offshore industry.