We now have more definitive details on the tragic crane collapse that occurred in China on Tuesday taking five lives and can now confirm that it was a 1,000 tonne crawler crane. 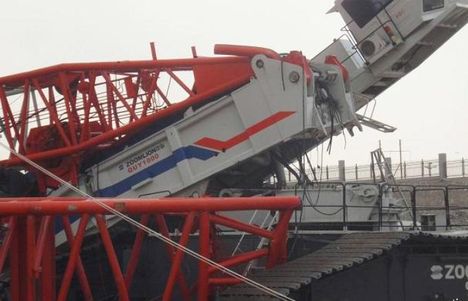 The crane a Zoomlion QUY 1000 crawler crane owned by Ningxia Tianxin Construction and development was lifting a 5MW wind turbine nacelle at the production facility of Sinovel where it was made. The load was recorded as 318 tonnes which was within the cranes capacity.

As the crane took the load out to a greater radius the boom suddenly gave way at its base and collapsed. The sudden unloading of the superstructure caused the derrick mast to go over the rear which together with the heavy counterweight ripped the superstructure from the slew bearing. 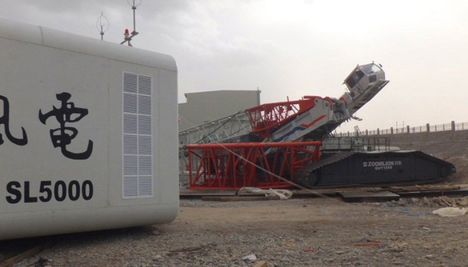 There were reports of a ceremony being held at the site to watch the turbine being erected, but Sinovel has denied this. It claims that the crane was simply testing and preparing for the actual lift due to take place the following day.

A full investigation is on-going, Zoomlion has sent a team to join the investigation and the local mayor has demanded that new rules be implemented in order to prevent a reoccurrence.