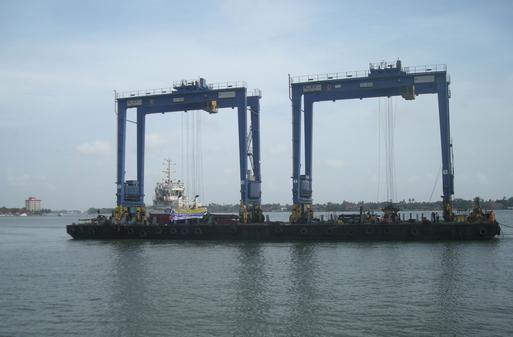 Almost after a gap of more than a month, mobile harbour cranes began functioning at the New Mangalore port from the second shift on Tuesday.  The mobile harbour crane operators, whose five-year contract term came to an end on September 3, had stopped operations since September 4. The trade and industry here had sought early solution to this issue as many users were receiving the gearless vessels at the port, as the port had the facility to handle them in the form of mobile harbour cranes.

(Gearless vessels are ships without cranes or conveyors. These ships depend on the shore-based equipment at their ports of call for loading and discharging.)

Sources in the port told Business Line that there is no change in the financial terms and conditions. However, some relaxations are given in other conditions. Asked about the relaxations, they said instead of annual payment of licence fees, the operators will pay monthly on a pro-rata basis.

To a query on the licence fee during the period between September 4 and October 11, they said licence fee will be prospective and not retrospective. Other relaxation is the third crane will not be used, and it will remain as a standby. The extension is for one year or till the new crane comes, whichever is earlier, they said.

All these have been approved by the Board of NMPT at its meeting last week, they said.

The port is in the process of launching a tender for operating mobile harbour cranes on PPP model, they added.

Mr M. Shekhar Pujari, President of the Association of New Mangalore Port Stevedores, said that though one month is already gone, it is a good thing that the issue has been resolved.

“Our request to the port is that they go for a new tender, and finish it in a time-bound manner,” he said.

Terming it as a good move, Mr Praveen Kumar Bangera, President of Mangalore Steamer Agents’ Association, said that mobile harbour cranes should be pressed into service under the PPP model as early as possible.

Welcoming the port’s decision, Mr Mohammed Ameen, Vice-President of Kanara Chamber of Commerce and Industry (KCCI), said that this will definitely benefit the trade and industry a lot.