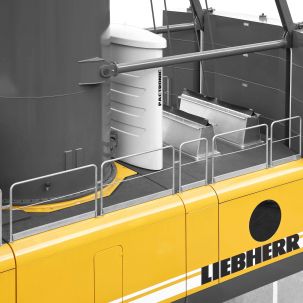 Reducing the energy expended when handling cargo at port is a ‘win’ for all concerned.

Fuel efficiency saves money by reducing the cost of each lift as well as lowering emissions and, quite often, also noise. As long as the technology pays its way, then the buyer is happy to invest and the supplier has new markets to target with its research and development budget.

Ports also take into account the forward-proofing factor when making such decisions. It might not be clear now what new operating regulations will be passed in the next decade, but it is a safe bet that they will involve limiting energy use and pollution, not increasing them. Technology that promises to reduce a terminal’s long-term carbon footprint is, therefore, worth the premium it often costs.

Apart from supplying some of the more technologically-advanced and environmentally-friendly cranes on the market, Gottwald also offers a retro-fit package for mobile cranes. This includes an external power supply option which allows the operator to bypass the onboard diesel-driven generator. Apart from improving efficiency and operating life, Gottwald claims the external supply reduces exhaust gases and emissions.

Pactronic is a hybrid drive system which doubles hoisting power and increases speeds thereby boosting turnover by 30% compared with a conventional machine with equal power rating of the primary energy source.

“In addition,” claims Liebherr, “Pactronic leads to a reduction of fuel/energy consumption as well as CO2 and exhaust emissions in the range of 30% depending on the operation.

“This is quite an issue in two ways. For possible future pollution taxes Pactronic guarantees further economical advantages and, of course, it’s an essential milestone on the way to genuine ultra-efficient, low emission cargo handling.”

All this is achieved not by enlarging the primary energy source, but by adding a hydraulic pressure accumulator which stores the energy released during lowering. This energy is then used on demand as a second energy source. “Charging of the accumulator is done by regenerating the reverse power while lowering the load,” says Liebherr. “In addition, the surplus power of the primary energy source is also used for charging the accumulator. The stored energy is transferred back to the system when the crane requires peak power during hoisting.”

Liebherr claims a machine equipped with Pactronic handles the same quantity of cargo in 30% of the time. “All running costs within the timeframe which were gained by the quicker operation are actual savings for the customer,” says the company. “Savings in energy costs, maintenance costs and labour costs are the most evident.”

A new entrant into the crane technology sector promises to shake things up by promising fuel savings of 40% on cranes that are retro-fitted with its new system. Taking the energy storage concept a step further than most is the Centre for Concepts in Mechatronics (CCM), located in Nuenen in The Netherlands. With financial support from the port of Amsterdam, CCM has been working with Maja Stuwadoors for the last five years on a concept to improve the process by which the energy released by cranes can be stored and re-used.

CCM is best known for its success in developing more energy efficient flywheel technology for use in public transport systems. But once the company turned its attention to semi-mobile and static applications where robustness, reliability and endurance are more important than weight and volume, managers quickly realised that the port crane market offered huge potential.

The CCM Crane Flywheel system has been purposely designed for a diesel-electric grab crane. It is configured as a two terminal, DC kinetic energy storage system, deploying a steel flywheel directly coupled with an AC motor/generator which is controlled by a bi-directional motor controller.

The system has been developed with largely ‘off the shelf’ parts and can be installed as a ‘Plug & Play’ component on cranes without affecting the overall control of the drive, according to CCM.

“The energy reduction and directly associated CO2 reduction depends strongly on the load cycle and can vary, for example, for floating and mobile harbour cranes, between 20% and 60%,” says CCM. “The absolute energy and emission reduction depends on operational hours and crane size.”

The Flywheel itself is a high grade steel disc wheel which runs on shock-proof, long life rolling element bearings that are oil lubricated. The energy is stored as mechanical energy (rotational) and is exchanged electrically via the three phases of the AC motor/generator and the motor controller that coverts it into DC voltage.

The Flywheel and motor are directly coupled via a mechanical coupling that allows for some misalignment between Flywheel and electric motor which are mounted together on a steel support structure. Gyroscopic forces that might impact the flywheel are taken care of by bearings.

In July the flywheel concept developed by CCM and Maja will be installed on its first unit – Maja’s Cornelis Tromp floating crane, one of seven operated by the company.

“It is expected to save us 40-50% on gasoil,” says Marco Hollerman, co-director of Maja.

Liebherr to expand use of carbon fibre technology