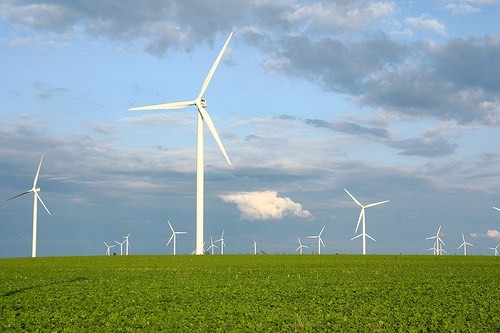 Just a few days ago the Department of Energy announced a ten-year plan to make wind and solar power as cheap as fossil fuels, and at least one top player in the future energy field is off to a roaring start. That would be GE. The company has just completed acquisition of a next-generation technology that lowers the cost of installing wind turbine towers, resulting in an overall savings of up to 12%.

The new technology was developed by a Utah-based company called Wind Tower Systems. It addresses the need to build taller towers, so turbines can catch higher winds and operate more efficiently. The problem is, taller towers are more expensive, which raises the overall cost of wind power. For one thing, they require a huge amount of equipment to install (the company cites a figure of 36 trucks just to haul conventional lifting crane components). In addition, oversized trucks are needed, which limits the availability of wind farm sites to locations where roads are wide enough — or the cost of road widening gets added to the equation.

A Better Way to Build a Wind Turbine Tower

Wind Tower’s solution is a lifting system they call “Hi-Jack.” It’s basically a compact, lightweight, highly efficient crane that crawls up the tower, building as it goes. They developed it with $850,000 in Department of Energy research grants and a $3,100,000 matching grant from the California Energy Commission. The Hi-Jack system can be transported in smaller trucks, and the company estimates that it takes only about six truckloads. Due its relatively low cost, it opens the potential for small wind farms in remote locations. It can also be kept on site after the turbines are installed, which can save money compared to calling in equipment when repairs or maintenance are needed. As the company notes, cranes-for-hire are expensive and not always readily available, resulting in extra down time that would cut into a wind farm’s bottom line.

The growing number of wind farms brings with it a growing potential for community issues. Good neighborliness is – or should be – an essential aspect of future energy, and solutions like Hi-Jack make a contribution by reducing truck traffic to a minimum. In comparison, fossil fuel harvesting often involves a huge amount of ongoing truck traffic. Coal is an obvious example but natural gas is not immune: a typical fracking operation (fracking is the pumping of chemical brine underground to release gas from shale deposits) requires hundreds of tanker trucks to haul water and wastewater.

Closing the sale – the definitive answers you won’t like.