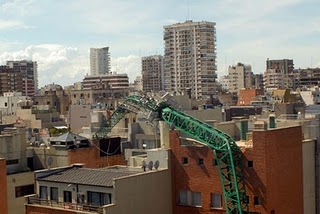 Buenos Aires, Argentina (Palermo Las Canitas) A tower crane on a specially designed pedestal collapsed killing no one. It fell over four buildings, destroyed the ceiling of one apartment, which would have likely killed the occupants if they were in that spot, but everyone walks away from this one. 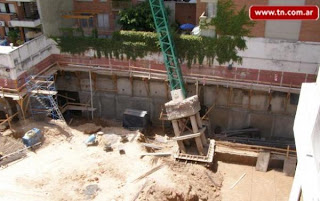 Looking at the design, I’ve never seen anything like it. It’s a large concrete footing on top of four concrete pillars. At first my thought was that that they were trying to make it easier to finish the building at the end of the job. Normally you would pull the tower sections out, then go back and fill in the 3×3 meter holes in the floors that allowed the crane through. But if you had four concrete pillars close together like that, what could you put in that area of the building? So ease of removal couldn’t have been the case. It actually looks like it would make it 100 times worse because you would have to remove all of that concrete. The only thing even remotely close to this that I’ve ever seen is a crane that was anchored to a large structural concrete beam that then had Aluminium Screw Jack Shoring for the next two floors down. 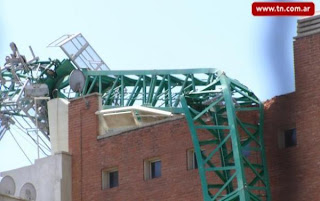 Looking at the base, I just don’t like the way it’s set up. You have a crane that is sitting on top of this large concrete block as if it’s a raised footing. Then you have two floors of concrete columns. It would be one thing if the concrete portion had something to resist the torsional loading, but I don’t see much that would resist that. I see some wood, but a compression or two on soft wood and you simply have wood sitting there and providing no resistance. We’ve all felt concrete floors move under us when a car drives by in a parking garage, and frankly a crane being loaded and torquing up to swing is doing the same thing to concrete. Since even flexible concretes are terrible in shear, what is stopping this concrete from moving? In the case of the crane on the large structural beam that I’ve seen, it was all tied into the floor of a building with enough mass to resist it. Here, there is little mass, and the mass that is there, only makes it worse because it’s so top heavy.

For us in the field, this strongly points out the need to inspect your cranes, daily, and prior to your shift. Get out that flash light and look for concrete cracks. Don’t show up to your crane and just run up the ladders. You might get the odd person whom doesn’t understand. But here is the reality. That concrete, it didn’t crack overnight. It was moving, and those cracks could have been seen. The same is true with most weld cracks. They spend a while moving and tearing just a bit more each time until enough of the weld has failed that it can’t take the stress at all and let’s go. Dig around, look. One other important thing, notice that the failure is on the side that would normally be considered loaded because the limited size of the jobsite on that side of the crane? The counterweights load that side of the crane nearly as much as the maximum pick on the jib side. So be sure to look at all sides of your crane thoroughly.

This story was brought to my attention by another blogger. Gustavo with Gruas y Tranportes (Cranes and Transports) alerted me to the story as it was in his home town. He has written a few blogs on it and there is some more information that can be found there. Thank you Gustavo.

This morning a video from inside one of the apartments came out on this website. Can you imagine the fear of watching TV while sitting on that couch! If you were under it, it might be deadly. I also found it interesting to see so clearly where the rebar was helping the concrete hold together.