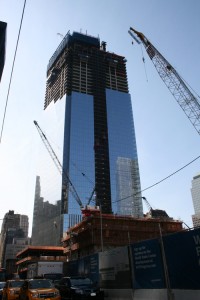 An investigation into the faulty World Trade Center crane that dropped a load of steel beams from 40 stories above ground on Feb. 16 might take several months to complete, according to the Port Authority of New York and New Jersey.

The crane, which was operating at Four W.T.C., was immediately placed out of service following the incident. But construction that was temporarily suspended has resumed using other tower cranes, according to Steve Coleman, a spokesperson for the Port Authority, the bi-state agency that is overseeing the investigation. Representatives from the city Department of Buildings, the Occupational Safety and Health Administration, Silverstein Properties, and Federated Crane, the crane’s owner are all participating in the study.

“The investigation will take months given the reviews that will be done, including expert reviews of the crane’s hydraulics and metallurgy,” said Coleman. “In the meantime, we have met with Community Board 1 to inform them of the progress in the investigation and will continue to meet with them as the work proceeds.”

While Coleman said the accident did not affect the Port Authority’s projects (One W.T.C. and the Transportation Hub), he wouldn’t comment on if and how it impacted work at Tower 4.

Silverstein Properties and construction manager Tishman Construction declined to comment on the matter pending the outcome of the investigation, though representatives of both companies are expected to provide an update on the investigation at the March 12 World Trade Center Redevelopment Committee meeting.

O.S.H.A. is scrutinizing the incident using guidelines codified in the federal Occupational Health and Safety Act, according to U.S. Department of Labor Spokesperson Edmund Fitzgerald. According to D.O.L. records, it is one of a few dozen incidents the agency has probed since the beginning of the redevelopment of the W.T.C., some of which are classified as “serious.”

“The purpose of any inspection is to determine which workplace safety standards apply in the given situation and whether or not the employer complied with those standards,” said Fitzgerald. “If an inspection determines an employer isn’t in compliance with the safety standards, we could issue citations or fines to the employer. If we determine it’s a serious violation of any sort, there’s always a fine involved.”

On Tuesday, Feb. 28, C.B. 1 Chairperson Catherine McVay Hughes and Cedar Street resident Pat Moore met with officials from the Port Authority’s risk management division to discuss the matter. “They told us the crane of discussion has been brought to a warehouse in New Jersey, where it is being inspected,” said Hughes.

Hughes and Moore were also told the D.O.B. issued a stop work order of a same-model crane at Tower 3 between Feb. 16 and Feb. 23. “They inspected it, and then it went back online,” said Hughes.

Asked about the duration of the investigation, Hughes, a trained engineer, conceded that cranes are complicated and stressed that it’s important that the investigation be performed thoroughly.

“Everybody was lucky this time that no one got hurt,” said Hughes. “The crane is offsite, so we’re no longer at risk, and the relevant parties… seem to be taking it seriously and making sure it doesn’t happen again. Still, we’d like to know why there was a malfunction of the crane.”

The Port Authority is arranging a safety tour of the site for Hughes and other C.B. 1 members in the coming weeks.

Meanwhile, construction workers who have resumed their daily grinds at Tower 4 continue to feel grateful they weren’t injured that day.

Iron worker Tom Hamann, who was working on the building’s façade from the edge of the 37th floor the day of the accident, recalled the chaotic scene that morning. “I saw the load come up past me like a normal day,” he said. “Next thing I know, I looked to my right and I saw the load coming back down… then it started picking up speed, and I realized it wasn’t stopping.”

Seconds later, the steel beams crashed onto a flatbed truck on ground level, miraculously leaving everyone unscathed. At the time, however, Hamann assumed that a handful of workers were instantly killed, and suspected the crane would collapse onto him next. “I was yelling the whole way, trying to warn people, but it just happened too quick.”

While the near-disaster gave him the jitters for a few days, Hamann said he is right back on the building’s perimeter, finishing the job he was working on that day. “It’s the kind of work we’re in,” said Hamann. “Accidents happen.”

The R’s of Rigging Management – The Pro Rigger, ITI