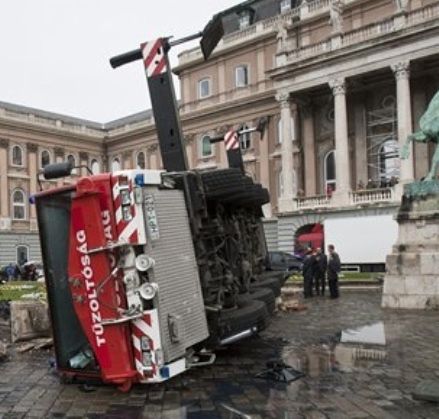 An All Terrain crane owned and operated by the Budapest Fire department turned over on Wednesday while lifting artwork into Buda castle.  The crane a four axle Tadano Faun ATF 60-4, working over the rear, had just lifted a crate of Munkácsy paintings in to the castle by way of its large balcony.  One front outrigger beam, the least beneficial one for the lift, was fully extended, while the rear one on the same side was partially extended. The two outrigger beams on the opposite side were set up fully retracted in order to avoid damaging the grass.  Thankfully the paintings, the Christ Trilogy by Mihály Munkácsy had already been removed from the crate. It is thought that wind caught the crate as it was removed from the balcony, and when combined with the amount of boom extended created enough of a side load to pull the crane over onto its side. The boom nose came to rest in the middle of a parked car. Once again luck played a part in that the car was unoccupied.