With all the reports of wind turbine installations we could not resist publishing a report on a more traditional windmill erection job. The Zeldenrust Windmill in the Dutch town of Dokkum is an octagonal ‘stellingmolen’ or Smock and cap stage mill, with four pairs of stones two for wheat and two for producing pearl barley. 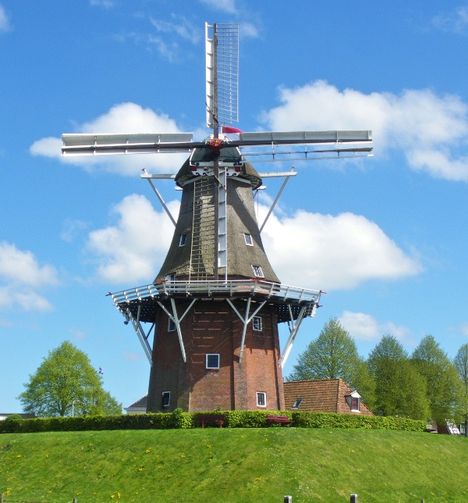 Now a national monument the mill was built in 1862 by millwright F van Delden of Olderker at a cost of 9,400 guilders for miller J M Bakker after a previous mill on the site burnt down. The current owner is the Foundation for Monument Preservation Dongeradeel. In June 2008, the Dutch National Service for Archaeology, Cultural Landscape and Monuments donated money for the restoration with additional contributions from the Prince Bernhard Culture Fund, Friesland Province, Municipality Dongeradeel, Bankgiroloterij and The Dutch Mill Foundation.

The current restoration began in August 2010 with the third storey stage construction and thatched hood being completely renewed. The brickwork in the octagonal base was also entirely repointed.

Dutch crane rental company BKF was involved in much of the restoration process, including in dismantling and transporting the parts that were to be restored. The bulky parts had to pass through the narrow streets of the Dokkum both out and then on the return and involved a great deal of patience and equipment selection.

On May 12th of this year BKF-crane operator Durk Visser finally lifted the15 tonne windmill hood into position with his 130-tonne Tadano Faun ATF to a height of 22 metres. The crane working with around 44 of its 52 metres of main boom extended can handle the load up to a radius of around 17 to 18 metres.

The 22 metre span sails are now being installed and the mill will be returned to full working order it will then be open to the public by appointment. 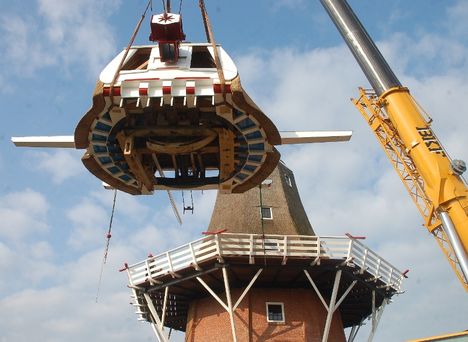 BKF is based in Franeker, Northern Holland purchased its first crane in 1973, got into the business on a professional level in 1976 and now runs around 55 cranes with capacities of up to 400 tonnes from six locations in Northern and Middle Holland.