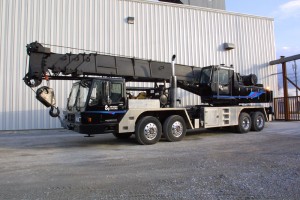 A hire firm boss has admitted a mobile crane that leaked oil on the A92 before a fatal car crash was not safe for the road.

Lawrence Whyte, 40, of Ellon-based William Whyte Cargo Handlers, initially told the inquiry in Stonehaven Sheriff Court that he believed the crane was roadworthy.

But he went on to admit it was not when shown the condition of some of its parts.

The Terex mobile crane headed south on the A92 Stonehaven to Montrose road on the morning of January 9, 2008.

They all died after their car skidded out of control on a bend and collided with an oncoming vehicle.

Police and witnesses told the inquiry last week that the road surface was slippery with oil.

For the past seven days of the inquiry attention has concentrated on the servicing and maintenance regime at William Whyte, and the condition of a hydraulic hose which was found to be leaking oil on the day of the accident.

The crane driver, Hamish Anderson, of Dyce, and Whyte’s self-employed mechanic, Kenny McLeod, both admitted full services were never carried out on the crane or as part of the company’s practice.

Mr Anderson admitted he often ticked the boxes in daily and weekly checklists without doing the required checks.

Yesterday,fiscal depute Tom Bowman put it to Mr Whyte that it was his job to get business for his cranes, not to ensure they were fit to go on the road.

Mr Whyte said: “They are fit to go on the road.”

Mr Bowman then showed Mr Whyte the burst hosepipe and its damaged protective sleeve, removed from the crane for repair after the accident.

He said: “The hose had been chafing against the transmission mounting bracket and abraded the sleeve and the hose, causing the leak which was reported by Hamish Anderson on the day of the accident.

“It would have taken quite sometime to abrade the hose.

“Are you telling us that the crane was fit to be on the road?”

At that point Sheriff Kenneth Stewart, presiding over the inquiry, said: “Earlier you said the crane was safe to go on the road. Is it yes or no?”

Mr Whyte replied: “No. I was led to believe the crane was fit for the road.”

The inquiry is scheduled to resume on April 7.