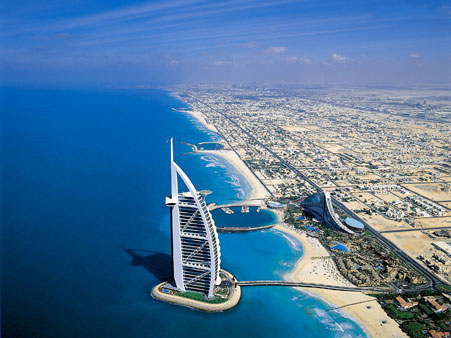 DUBAI // The last crane at the top of the Burj Dubai will come down soon, and that’s really the story of Dubai’s fast-disappearing crane culture.

As existing projects are completed and the economic slowdown takes its toll on new construction, the city’s forest of cranes is thinning out and its skyline is noticeably changing.
At the peak of the building boom in 2006, the apocryphal statistic that Dubai had between 15 and 25 per cent of the world’s tower cranes was widely reported.

Some said there could be as many as one tower crane for every 44 residents. But industry experts say that while such “facts” made good headlines, they were unlikely to have ever been true.

“It was a quote that everyone jumped on,” said Steve Barritt, regional manager for Middle East operations at Ritchie Brothers Auctioneers, a construction equipment auction house in Dubai, referring to the suggestion that Dubai had a quarter of all the world’s cranes.

“If you consider the size of Dubai compared with either China or the US, it would be a hard fact to accept.”

Keith Lupton, director at World Wide Auctioneers, added: “I always doubted that there was a vast amount, but it made a good story.”

Still, there is no doubt that there were an awful lot of cranes rising from the city’s skyline. So many that they became part of the Dubai story, a symbol of its ambitious and breakneck growth.

During the boom years, when the Burj Dubai – which will be the world’s tallest building – and skyscrapers at developments such as Business Bay and Dubai Marina were launched, there was also heavy demand for cranes and contractors were willing to pay top dollar.

The Burj Dubai alone, which is thought to have topped out earlier this year at 818 metres, needed three tower cranes with a maximum lifting capacity of 25 tonnes each.

Now, with 566 projects in the UAE cancelled or put on hold, according to the Dubai-based research company Proleads, the question begs asking: where have all the cranes gone?

Many, industry insiders say, are languishing in pieces in scrapyards or are being sold through auction houses as contractors restructure their businesses.

“The newer cranes would be kept, but the older ones, people would have started scrapping them for metal.”

Since the Dubai’s Government is still investing in infrastructure, some contractors are also selling equipment once needed for constructing buildings such as their cranes, and are using the money to buy the machinery required for infrastructure jobs such as roads and bridges.

“They’re taking equipment from these businesses and reselling it but revamping their civil engineering and infrastructure businesses, because the work is there.”

Despite the financial downturn, Mr Barritt said, Ritchie Brothers had in the past year seen an increase, from 500 to 700, in the number of bidders registered to participate in its Dubai auctions, which take place four times a year.

The volume of machinery on auction has also increased, while prices have fallen to more “realistic” levels, he said.

“People are turning their equipment into liquidity, and we are a very good way of doing that.”

Compared with two years ago, when 60 per cent of the machinery sold through Ritchie Brothers would be used for projects in the UAE, most is now going to Saudi Arabia, Qatar and North Africa, he said. “People are coming to us because they can buy good quality, young, second-hand equipment.”

It can be big business. A top-of-the-range tower crane that can carry 16 tons costs about US$565,000 (Dh2.1 million).
Other auction houses are also seeing greater demand for construction equipment from India and countries in the Far East.

What does your voicemail say about you?