An incident involving a crane, classified as a traffic accident, indirectly killed a man in the Alandur area of Chennai early yesterday morning.

The mobile crane working on construction of the Metro Rail project reversed into an electricity pole near the areas subway station, causing it to come down and cutting the electrical supply to the area, plunging the neighborhood into darkness.

A local resident S. Vinayagam, 57, came out of his house to see what was happening and stepped onto a live power line and was electrocuted. The crane operator Sanjay Maraka Jesilas, 39, was arrested for ‘rash driving’. 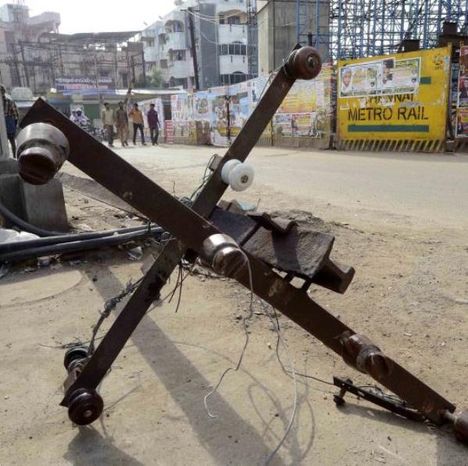 The crane brought the pole down

The crane was being used to lift panels to the upper floors, at a height of around 17 metres. This is the second fatality in the area caused by the Metro Rail construction. An employee was killed in January when a beam dropped on him.

The safety record on India’s metro construction projects, currently underway in a number of large cities, is appalling. And yet every time there is an incident the most junior employee involved – in this case the crane operator – is arrested and prosecuted, while the senior managers and job planners carry on regardless.

When a larger incident occurs and more people are killed there is some public uproar, but nothing ever changes and rarely a month or two goes by before another poor sap loses his life. If India is serious about keeping up with other BRIC countries it must address this situation urgently – it is falling behind the others at a rapid pace, at least in terms of work practices on construction sites.