An operator dismantling a self-erecting tower crane in Germany is said to have made an error that resulted in the crane overturning at a site in Osterhofen Bavaria. Thankfully on one was hurt in the incident which occurred on Friday. 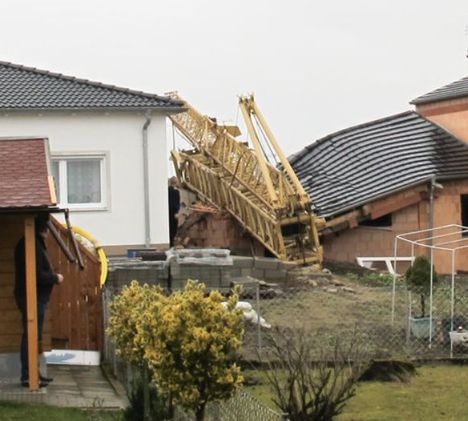 The tower landed on a garage between two homes

The tower of the crane went over the back of the counterweight and landed on a garage completely demolishing it. Two houses either side were reportedly untouched.

The crane’s tower went over the back of the counterweight

The crane was supplied from the rental fleet of Kaiser Baumaschinen, which dismantled and carted it away yesterday. A police statement clearly blamed the overturn on operator error, although it has not been confirmed if any independent accident inspectors had seen the crane before it was removed.

The garage was completely demolished