A four axle All Terrain crane overturned yesterday on the D-149 near Cognac in South West France.

The crane was apparently travelling normally on the busy road when another vehicle overtook and then braked hard, causing the crane driver to swerve. The crane, a Grove owned by Bordeaux based H.Moreau which also has a depot in Cognac, went up onto the verge which was soft due to heavy rain and then went over as the ground gave way. The operator suffered a serious fracture to his arm, but no one else was involved or hurt. 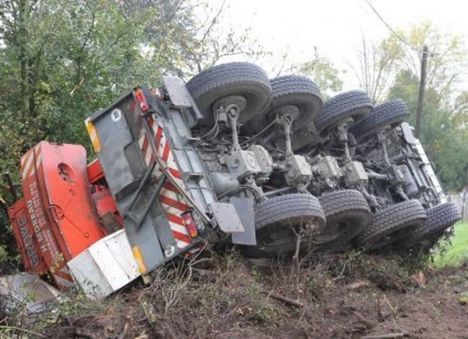 The crane was due to be recovered yesterday evening but was still lying on the verge as the light faded.

With many parts of Europe experiencing a good deal of rain, operators need to take extra care when travelling on smaller roads, dozens of All Terrains flip over like this ever year, causing huge inconvenience and costs. Not to mention the chance of injury.