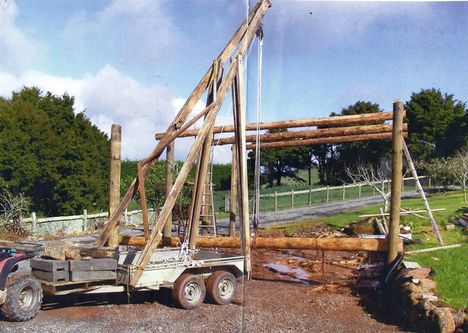 A reader from New Zealand has sent us a very unusual photo of a homemade crane mounted on a trailer.  There is not much we can say about it really except there must be more to this, it looks like the result of some challenge to build a crane out of wood and rope.

Perhaps it’s best if we leave it to our correspondent whose letter said:

“Attached is a photo I came across last year. You might find some humour in it.

The pick and carry crane was spotted at Matarau, Northland, New Zealand.

It is really an enigma considering that the manufacturer was employed by an engineering company which owns a range of cranes and has them for hire.

Note the modern trailer base, the mixture of counterweights – cast iron and local rocks, the five-part tackle with 21st century running rope and the anchor – the tie rail on the trailer.

“Also the prime mover – a Japanese built Quad bike. One wonders if the cost of an hours hire at ‘mates rates’ of a truck and loader crane would have been more economical than the effort and risk. There is the thrill of reinventing medieval machines though!”