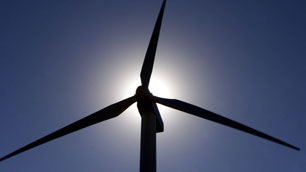 Yukon Energy wants to significantly expand its capacity for wind generation by installing a wind farm in central Yukon that could potentially produce as much energy as the Whitehorse hydro dam in winter.

The test site is at Ferry Hill, near Stewart Crossing on the Klondike Highway.

Yukon Energy spokeswoman Janet Patterson said the first step will be to install special wind monitoring equipment at the site.

“We’ll keep that up there for a year and then after a year, if things look good, then we hope to be able to move ahead with up to a 20-megawatt wind farm.”

The corporation has two wind generators on Haeckel Hill near Whitehorse that have the combined ability to produce enough electricity for 150 homes.

They hope to install the Ferry Hill wind farm sometime next year, if the area produces the amount of wind they expect it will.

Patterson says the problem with wind generation is reliability.

Patterson says Yukon Energy is also considering Mount Sumanik, near Whitehorse, as another site for a wind farm.

The Day That Kroll Came to Town