The Day That Kroll Came to Town

Seattle Washington. No Accident, but a notable crane was erected. A Kroll K1800 was recently purchased and built for JCM Construction. The crane is by far the largest tower crane that has been up in Seattle. In the building of one of our sports stadiums we had a Liebherr 850 up and frankly the capacity at the tip of that crane isn’t half of what the Kroll is capable of. It’s a monster.

JCM is a joint venture between Jay Dee, Coluccio &amp; Michels Construction. They have partnered up to undertake a tunneling project that is set to provide underground light rail (Subway/Underground) between Capitol Hill (residential area just East of downtown Seattle) to the University District where you’ll find the University of Washington. The project has been dubbed the U-Link. It’s a 3.15 mile extension set to be bored by a TBM. This is much needed project here in Seattle as our freeway system was not well planned out. We lack public transportation outside of busing. This is another step that is crucial to our city moving forward. When you think of any major city in the world, it must include trains to move it’s people. So besides having a giant crane that gets guys like us all excited, this is a historic moment for the city. 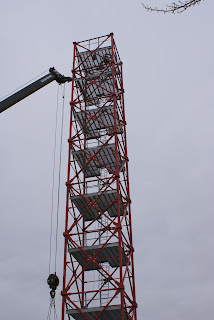 On to the crane story. The crane was erected by Northwest Tower Crane Service. The parts started arriving on the 6th of January. Each truck load was an over-sized load. As is typical with many large Kroll’s, the jibs are inverted with the trolley running on an I-Beam. Each of the jibs were 12 feet tall which is wider than the lanes of the road. With pilot cars in the lead and tailing, the crane was brought in bit by bit from Vancouver Washington, a scant 164 miles away, and the parts arrived and were assembled on site. The process ended up taking a total of 15 8 hour days to assemble. The crane was brand new and out of the box. If you’ve ever assembled a brand new crane, you know how many parts we are talking about and the time to locate each bolt and washer. It’s IKEA on steroids and from Hell. 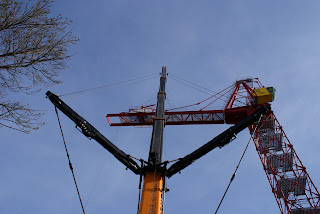 After the parts were assembled and staged on site, Ness &amp; Campbell Crane (One Company) brought in their Grove GMK 7550 outfitted with the Mega-Wing. The 550 ton crane was ran by Doug Ukert, whom runs a hook as well as one can be ran. As of the 25th, the tower was stacked and everything else was ready to go. So on the 26th, the 124,000 lb turntable, cab, and tower top were hoisted into place. 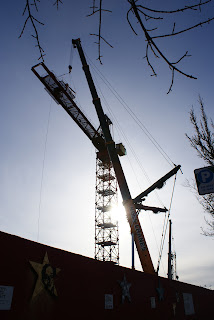 Next came the Counterjib. Weighing in at 52,000 lbs with the hoist in place, you can see that the 550 when outfitted with the Mega Wing doesn’t even deflect even though the full 197′ of boom is out. The process took longer than most counterjibs because of the size of the pendants. There were four connections to make instead of just two. This is no Liebherr 154 where I could move the pendants and make the pins by myself. Then two of the massive 20,000 lb counterweights were put into place. Even at this point the erectors noted that the 100 feet of tower barely flexed. A far cry from 305 feet of PECCO S35 towers with a 400 on it on loose bolts where it looks like you are at the end of long ski jump and looking back up. 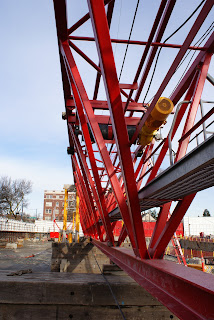 To make the 250 foot long jib pick, the 550 moved away from the tower. In the meantime, the crew sent down the load line and fully reeved up the crane. The jib was lifted off of it’s dunnage and towers and hoisted into place. the entire process of hanging out the turntable, counterjib, and jib took nearly 11 hours. This is with a crew that when I worked with them we had erected, reeved, and load tested a Liebherr 630 in 14 hours. It’s simply a long and slow process. But when you consider that it was reeved already, it’s not a bad time frame for a new crane of that size. 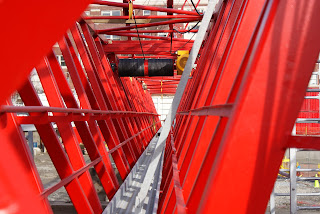 The crane is fully erected and only has a few more hoops to jump through. Washington State requires that all cranes are UL (Underwriters Laboratories) Listed. A private company is coming in Saturday to do that work. On Monday, the plan is to load test the crane to get it fully certified. This is where the numbers are impressive. I have to admit that I haven’t seen the load chart. So these numbers are my best good faith understanding of what they are. If anyone has more accurate numbers, let me know. The operator, Willie Steinberg, hasn’t sent them to me yet. But as I know them, in 4 part operation, it’s good for 60 tons. This will facilitate most of the TBM load out. It’s still not enough for the Cutting Head which will require yet another crane. The number that really impressed me was the tip capacity. 32,000 lbs! Liebherr 420 or Potain 485 maximum capacities… 250 feet out. 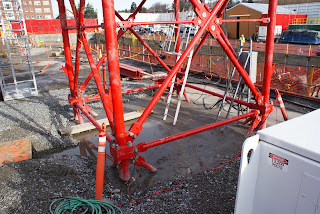 The base of the crane is right next to the edge of the hole that will be facilitating the TBM and keeping the work going. The concrete foundation is tied back. It’s also been reviewed and accepted by two Registered Professional Engineers. The hole is maintained by lagging and steel H-Beams driven into the soil. The foundation will be tested at each 45 degree position for 10 minutes with the maximum moment load. The code normally reads as at the tip, but the site will not facilitate that and the load would likely be over a live street or apartment buildings. The next best thing is to just hit the Load Moment which induces the maximum overturning moment on the foundation anyways. This test is performed with the weights next to the ground. Once stable, a measurement is taken of the clearance from the ground. After the ten minutes has passed, a second measurement is taken. If there is any deviation, then we have a soils support problem. If not, on to the next point. Normally this is done over a 90 degree arc, but since this crane foundation has been judged to be non-standard, it will be done over 360 degrees as the job allows. In this case it really can only be done over about 180 degrees. Once all of the load tests are complete and the crane is signed off by the technicians, we’ll be off and running in catching up to the rest of the world by having some underground service. Many thanks to Kroll and JCM for helping us rise up as a city by providing us a tall crane so that we can go underground.

I hope to get more pictures soon. I hope that you enjoy them.