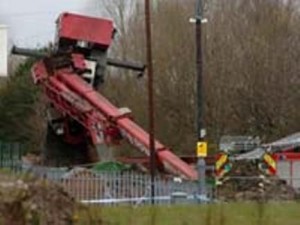 The accident occurred on a site in Liverpool in March 2007. Mark Thornton, 46, was working as crane supervisor for his employer Sitwell Construction, when the 50 tonne crane he was directing tipped over due to overloading. The load, a six tonne steel column, struck Thornton killing him instantly.

The crane operator – Frederick Scott, his employer Bryn Thomas Crane Hire – in administration and Sitwells were all prosecuted by the Health and Safety Executive.

At a hearing at Liverpool Crown Court yesterday, prosecuting counsel, Nigel Lawrence told the court: that a third column, which was heavier than the previous two, needed to be turned though 80 degrees using a guide rope held by Thornton. Scott boomed down to increase the radius causing an overload situation. As the column turned, it caught in some trees which caused further instability. The crane’s front wheels lifted off the ground and the crane tipped, stranding Scott three metres off the ground but he managed to leap to safety.

Lawrence added: “Put simply, the crane fell over because it was overloaded.”

Scott, 46, pleaded guilty to six counts of breaching section 7(a) of the Health and Safety at Work Act by failing to take reasonable care for the safety of Thornton.

He also admitted failing to check that that crane’s overload alarm was audible and that override switches were working, neither of which was the case.

His defence counsel, Adam Farrer, told the court that Scott had only three months’ experience and was reluctant to question his employer. He went on to say: “The crane in question was by far the largest he had ever used and Scott was only given familiarisation training on a live site two hours before the job.”

Scott was ordered to pay a £2,500 fine, without additional court costs due to his financial situation and given up to 12 months to pay.

Sentencing, Judge Nigel Gilmour said: “Mr Scott either should not have been employed or should have been given sufficient training. His failure to take reasonable care was not born out of deliberate risk taking, but a lack of experience and skills. He is guilty of a high degree of incompetence but he was previously a man of good character.”

Bryn Thomas Crane Hire was fined £4,500 for breaching health and safety regulations by failing to ensure that its equipment was in good working order. The fine was ‘significantly reduced’ due to the fact that the company is in administration.

Lawrence told the court that the crane was found to have missing screws, faulty override switches and an insufficient external audible overload alarm.

Addressing Thornton’s family, the company’s defence counsel, Bernard Thorogood said: “No amount of regret can plumb the depths that the family’s grief covers. The impact of the day is very upsetting to the people who run the company and they hope that doesn’t sound like an empty statement.”

Judge Gilmour said that he accepted that there was no suggestion that the violations were “a cost cutting exercise at the expense of health and safety”.

The third defendant, Sitewell Construction, is to be sentenced at a later date while its financial situation is examined by the court’s forensic accountants.

HSE inspector Sarah Wadham said: “The accident was wholly avoidable. Work involving cranes should be properly planned and supervised and all machinery should be properly maintained. This tragic accident should send out a strong message to the construction industry that all construction companies involved in crane operations should take those precautions.”