More than eight years after two men were killed by a collapsing tower crane in Battersea, the case is finally set to reach court. 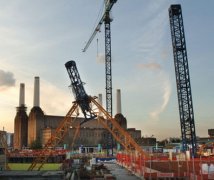 Falcon Crane Hire Ltd and director Doug Genge are scheduled to make their first appearance in Westminster Magistrates Court on Wednesday 25th February in a prosecution brought by the Health & Safety Executive.

Crane operator Jonathon Cloke, 37, fell to his death from inside the cab of the crane when it overloaded and snapped at a Barratt Homes site in September 2006. The jib of the crane then struck and killed Michael Alexa, 23, as he cleaned his car in a neighboring street outside the development.

The inquest into their death concluded in March 2012 with a narrative verdict.

The GMB union criticized the slowness on the justice system. GMB national health and safety officer John McClean said that it was “a clear example of how little human life is valued”.

The GMB also took the opportunity to criticize the abolition of the tower crane register, which was set up by the previous Labour government in response to a campaign sparked by the Battersea failure.

The register was abolished in 2013.

The inquest heard that the root cause of the Battersea collapse was maintenance procedures. The Notification of Conventional Tower Crane Regulations 2010 – to give the tower crane register its full name – made no demands regarding maintenance. These are set down in the Lifting Operations and Lifting Equipment Regulations (LOLER) 1998, which remain in force.

Unlike in some countries, there is no age restriction on tower cranes in the UK. The crane that failed in Battersea was a BPR 222 that had been made in the late 1970s.