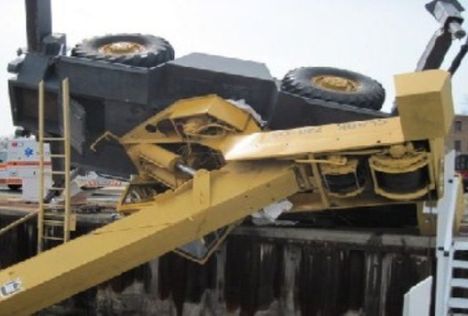 A Rough Terrain crane tipped over yesterday by the side of the river in St Joseph Michigan. The operator escaped with minor leg injuries.

The crane went over sideways at the Pier 33 Marina trapping the operator, Walton Dohner in the cab upside down hanging over the St Joseph river. The photos suggest that one of the outrigger beams was not fully extended on the side the crane tipped.

Colleagues managed to extricate him after smashing a window, he was taken to a local hospital and later released.

The crane, which looks like a very old Clark model, is owned by Donkersloot and Sons of New Buffalo, Michigan and was placing piles at the side of the water.

There was some oil and diesel spillage and later in the day a small fire broke out alongside the crane. The crane was removed later by a larger crane.