Climbing a tall tower crane in windy conditions is a risky business, but sometimes you have no choice.

One of the trickiest operations in tower crane deployment is ‘climbing’ – by which we do not mean the crane operator’s commute up the tower to the cab every morning. Climbing is the process of uncoupling two sections of lattice tower near the top of the structure in order to jack up the top part and introduce a new section into the tower, thereby raising the jib height. It’s an essential process in the construction of high-rise structures and the only way of keeping the crane constantly ahead of the building as it grows to full height.

A spate of accidents in the UK in recent years highlighted the risks associated with climbing; while not inherently dangerous, the process demands strict discipline and adherence to the manufacturer’s detailed procedures.

Great care must be taken because during the climbing operation the crane is vulnerable to destabilizing forces and, in particular, changes in wind speed and direction.
On an industrial site near the Bulgarian town of Pirdop, crane hirer Bulgarcom has had the tricky job of climbing a Spanish-built Linden Comansa tower crane in the shadow of the Balkan Mountains, a region known for its unpredictable weather and high winds.

The crane is on hire to specialist contractor Metalik AD which has the contract to erect two new gas treatment chimneys on the factory site, operated by international copper producer Aurubis Group.

As a by-product of the copper smelting operation, the Pirdop site also produces sulfuric acid which is exported for numerous industrial processes, mainly in 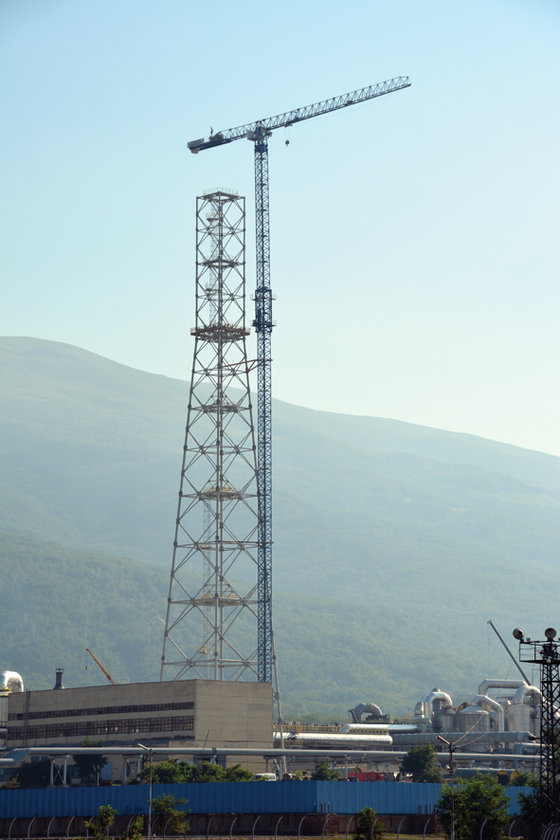 the petrochemical and fertiliser industries. Naturally, it is important that sulfuric acid and any other harmful substances produced during the chemical process do not escape into the atmosphere. The two new chimneys are therefore part of Aurubis’ “Bulgaria 2014” programme – a €44.2m (£35.3m) project launched in 2011 to improve environmental protection, reduce emissions and increase productivity at the plant. Each chimney comprises a glass-fiber reinforced flue pipe supported by an external steel framework and has been assembled with the help of a Linden Comansa 21LC290 tower crane. As the tower took shape, the crane was tied into it to provide lateral support.
Bulgarcom, which is also Linden Comansa’s official distributor to Bulgaria, arrived on site in March and by the beginning of April had erected the 21LC290 saddle jib crane to a freestanding height of 63.1m with a jib length of 40m. The crane then began lifting steel-work for the taller of the two chimneys.

Metalik AD erected the tower sections at ground level and lifted them in modules weighing up to 14 tonnes. As the tower took shape, the crane lifted sections of chimney flue and lowered them down the centre of the tower. The crane’s maximum lift capacity is 18 tonnes.

By the beginning of June, the tower was at almost half of its final 125m in height and it was time to climb the crane. But first, the crane was tied into the steel tower at a height of 49m above the ground to provide support and stiffness.

Bulgarcom’s erection team then used a Linden Comansa J2-10 cage to climb the crane to a height of 101.6m. This cage is essentially a steel frame that sits around the outside of the crane’s tower which can then ‘telescope’ inside the frame once the bolts securing the upper section to the lower section have been removed.

Once secured to the lower section, the frame’s hydraulic ram lifts the top of the crane clear and a new section of tower is lifted into place through an opening in the side of the frame.

This is the most delicate part of the operation, and it proved far from straightforward for the Bulgarcom team. Winds coming down from the nearby mountains were unpredictable and the weather conditions were constantly changing, says Tenko Tenev, chief technician with Metalik AD:

“We had many thunderstorms, and the constant changes of the wind were a big challenge for all of us,” he says.

Having successfully raised the height of the crane, Metalik AD continued building the tower until July, when another tie-frame was added at a height of 88m. The crane was then climbed again to reach the final height under hook of 134.6m. Now at its final height, the 21LC290 was able to finish the construction of the chimney’s steel structure and the installation of the heavy modules of the flue pipe by August.