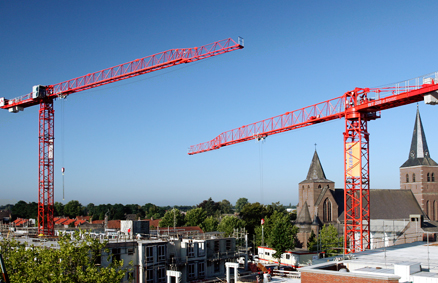 Wilbert has claimed the performance of its new luffing jib tower crane exceeds that of other comparable climbable models manufactured in Europe, opening up new markets beyond the traditional applications for such a crane.

The crane is equipped with a hoist gear capable of working at speeds of 185m/min and can lift 32t more than 900m with double rope. For loads up to 8t, Wilbert offers an additional runner winch and a 5m-long runner head that reduces the need for reeving work with lighter loads. 8t can be carried at a working radius of 83m.

The crane employs a modular design principle, with the basic jib length of 36m extendable in 6m intervals to meet the requirements of each job. The slewing element includes a counterjib that can also be extended from 10.5m to 13m depending on the load capacity. The modular principle also means up to 5 winches can be used depending on the job, a first for a tower crane according to Wilbert.

Wilbert said this means a freestanding tower height between 70m and 140m can be realised depending on the tower system and jib length used.

Other components of the WT 1905L e.tronic include a pendular counterballast, which reduces corner loads and enables higher freestanding tower heights; two load measuring systems to offer redundant protection against exceeding the permissible load moment; and a fully air-conditioned 6m container to house all electronic control systems to protect from dust and weather.

Wilbert said this crane establishes a “new era of large tower crane technology” and offers “an appropriate alternative to the 500t to 800t lattice mast crawler cranes currently in use” for the development of power stations.

This includes a reduction in space needed on the ground compared to a crawler equipped with superlift, up to a four-fold reduction in space needed for erection compared to mobile cranes, an increase in working radius, a minimised loss of load capacity on increasing hook heights, continued operation in higher wind speeds, safer operator positioning and the ability to grow with the development.

Underlining this growth potential are a number of sales already announced into the power industry. The prototype of the WT 1905L e.tronic is being delivered to a power station job site in Hamm, Germany, a further five have been ordered for a power project elsewhere in Europe and one more has been ordered for a dockyard.