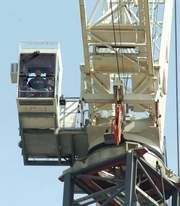 It’s cramped — his elbows almost touch the windows on each side of him — and it sways in the wind, sometimes two or three feet in any direction. But the view is unparalleled. Perched above the Indian River Inlet, Owens can see far into the Atlantic Ocean, south to Ocean City, Md., and northeast to the New Jersey coast. Bikini season on Delaware’s beaches isn’t too bad, either. Owens, 27, runs one of the two tower cranes mounted on either side of the inlet, where crews are building the new, $150 million bridge. His cousin runs the other.