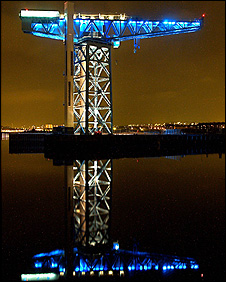 One of Scotland’s tallest visitor attractions has won two awards for tourism and heritage conservation.

The Titan Crane in Clydebank received a Civic Trust Award for an “innovative” £3m restoration which installed a lift up to its 150-ft high jib platform.

The honour recognised the use of night-time computerised coloured lighting on the 102-year-old Category A structure.

Scotland’s Culture Minister Mike Russell said: “The first winner of the special award for placemaking illustrates how a creative approach to conserving heritage can enrich the unique character of a community.

“The Titan Crane is an inspiring and long-lasting example of how a sympathetic approach to cultural and historic aspects of spatial development can enhance the creation of new places in Scotland.”

Since the refurbished craned opened to the public in 2007, it has attracted more than 13,000 visitors.

Eleanor McAllister, managing director of Clydebank Re-built, the regeneration company which started the restoration, said both awards were a “great recognition” for the area.

“Winning both the Civic Trust Award and the Scotland Placemaking Award is a very special achievement,” she said.

“It recognises the innovative design of Collective Architecture in restoring the crane and creating a lift access for visitors to the top of the crane that respects this iconic heritage structure on the River Clyde.”

It was used at the John Brown shipyard, where it helped with the construction of warships and vessels such as the Lusitania and the QE2.

One of five Titan cranes, it survived the Clydebank blitz unscathed despite being a target for German bombers.