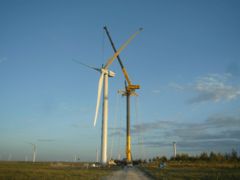 Manitowoc delivered the GTK to China Power Equipment Installation Engineering Co. Ltd. (CPIE) at the end of June 2009, accompanied by two of the company’s most experienced service personnel. The crane’s first job was to install two Shengguotongyuan 1.5 MW windmills with 77.5 m towers and turbines weighing 75 tonnes in Ganqika, Inner Mongolia.