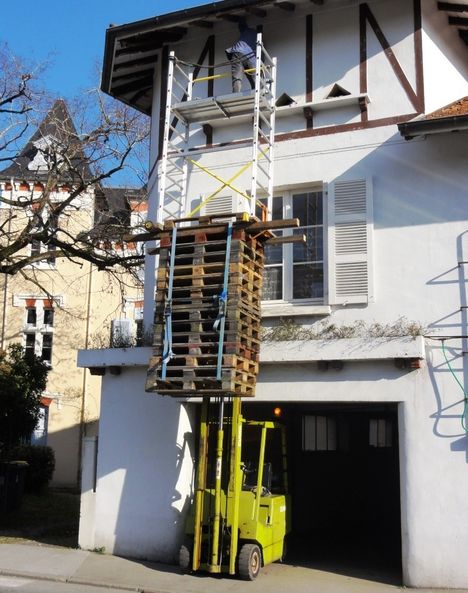 The following example of make-do access equipment was spotted by a reader in Salies de Bearn, South West France. It certainly qualifies among the top candidates for the craziest platforms ever built. Rather than organise a relatively small aerial lift or a proper mobile tower our man has used a stack of pallets plus a small work scaffold that he probably owns and placed it all on the forks of a lift truck.

He has at least strapped the pallets together – for safety – but then he has set the platform too high so that the guardrails – one of which is a rope – are only good as a trip hazard. And as if this is not bad enough he is working half in the platform and half out.There is no sign of any operator on the fork truck one wonders if the painter set the whole thing up and then climbed up there?

Most definitely a Death Wish and from a country with a strong safety ethic and a good penetration of aerial lifts.

In the words of our correspondent “Some people still don’t get it do they?”