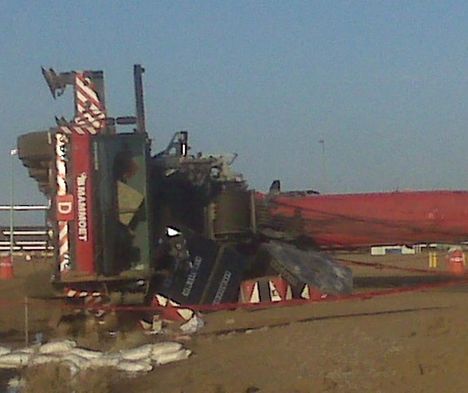 We finally have the information on the crane that went over in late April at a CNRL (Canadian Natural Resources Ltd) facility in Alberta. We understand that it is the Horizon oil Sands Project in Fort McMurray. The crane, a seven axle Liebherr LTM1400-7.1 owned by Mammoet, was apparently being driven into position to work on a flare stack- fully rigged with luffing jib, boom retracted and raised to full elevation. 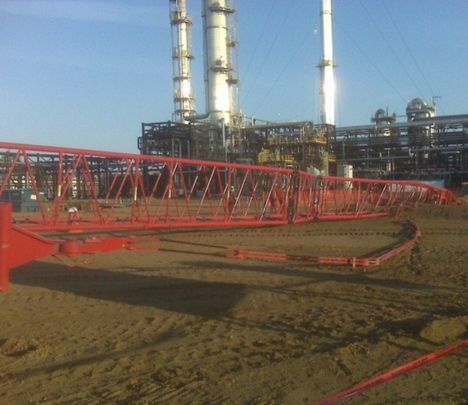 The cranes outriggers were partially extended – at least on one side – as a precaution. The only thing for certain after that is that the ground was not sufficiently flat or firm and the crane went over sideways. Thankfully no one was injured.

Why it happened we may never know, as is typical in these situation different people on site have different versions of what happened. In this case discussion appears to revolve around the crane deviating around an obstacle onto less firm ground than was planned and a disagreement between the operator and a site supervisor etc… etc… 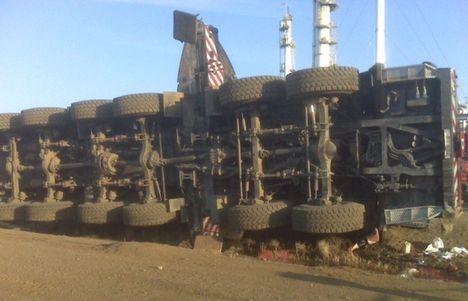 What really happened here we may never know, CNRL appears to have a poor safety reputation among many of those on site, but then they may have an axe to grind? The fact is that there are lessons to be learnt from incidents such as this that might save lives in the future.

Mammoet has a good safety ethic and has in the past been more than willing to share such information with the industry as a whole, hopefully it will be able to do the same with this case, once the investigation is complete?

Moving big All Terrain cranes with the boom up is a risky business that is best avoided if possible. When essential it is one of those jobs that need to be ‘over planned’ – Looking at the ground in the photos we have been sent, suggests that ground preparation was… well… not over done…and the distance the crane had to travel looks to be substantial?