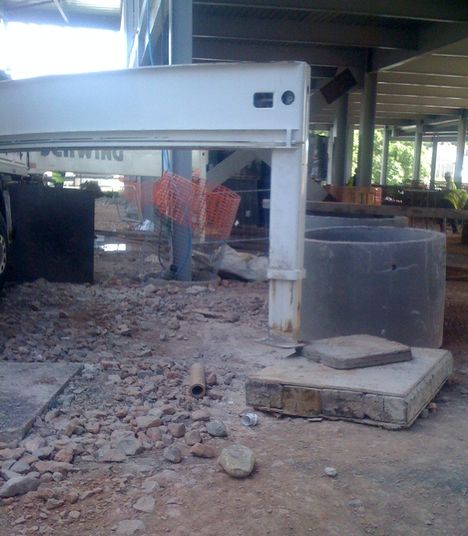 The use of decent mats under outrigger jacks helps prevent many accidents, however it is essential that the legs remain in position.

A reader sent us in a good example that occurred this week on a job site at Southmead hospital, Bristol in the UK. While it does not directly involve a crane or work platform the cautionary tale is equally relevant.

A concrete pump was in action on the site and appeared to have been set properly and according to the contractor’s – Carillion – safety requirements. The pump was though vibrating quite a bit as it pumped, causing it to move on its spreader mats.

It did not take too long before the front near side jack had completely come off of its spreader board, fortunately it was the least loaded outrigger of the four and did not cause a catastrophic issue. In fact the operator never even noticed it! When the pump was completed the operator – still oblivious to the problem spent his time washing down the machine. Before you ask we have to assume that at this point our correspondent went over to him and warned him of the unloaded outrigger jack. 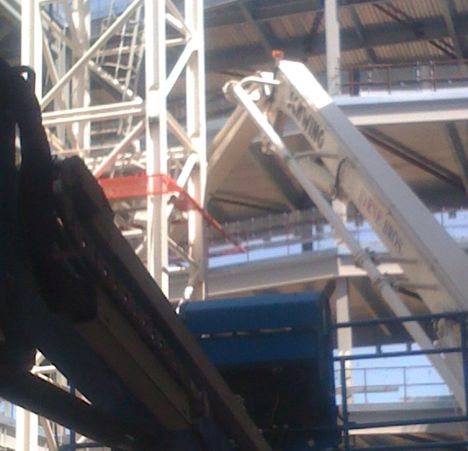 The situation was made worse by the fact that the pump’s boom was operating within inches of a tower crane mast. If the pump operator had moved his boom so that the load shifted towards the front, the unit could quite easily have crashed into the crane.

In the words of our correspondent “The point is that the main contractor is so strict on H&S, yet if you look closely the machine’s boom is working within inches of a 250ft high tower crane, what if it were to fail or is it more important to get the concrete laid first and worry about the outrigger later, and even whilst the operator was waiting for the next truck mixer to reverse in he was pre occupied with washing his truck! Too much effort I guess for all involved to fold the boom and reset the outriggers before continuing.

A Death Wish waiting to happen”

This example is particularly applicable to cranes being used for cycle work where repeated stop/start – load/unload actions do cause flex and movement, it shows that A walk around the machine at every opportunity is a good idea or in some cases of high vibration or movement having a man on the ground to keep an eye on everything.

It also shows that pressure sensors in within the outriggers, long fitted to aerial lifts and now installed on most new loader cranes, is not a bad idea. Although in the case of a concrete pump it would need to have a warning to alert the mixer operator to stop pouring as well.