A young Rough Terrain crane operator died earlier this week in Arizona, when the crane ran-away’ and overturned.  The operator,28, was driving the crane, described as a 100 ton Rough Terrain – although it is substantially smaller – down a dirt track in a granite quarry in Congress, to the North West of Phoenix Arizona.

Information is limited, but it looks as though the man was driving the crane downhill at Jake’s Granite Quarry, with the boom extended by at least two sections, when he lost control and it flipped over onto the cab side of the machine. 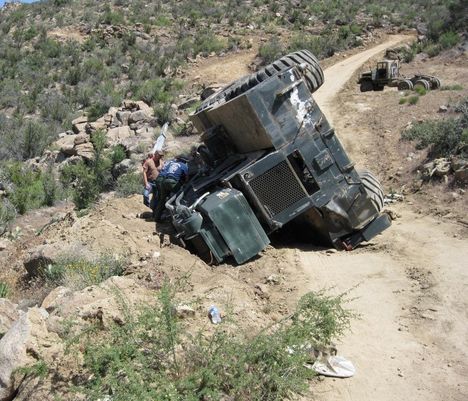 It took rescue crews over six hours to raise the crane free the man, who was then declared dead at the scene.

The Yavapai County Sheriff’s Office, federal Occupational Safety and Health Organization, and the Arizona State Mine Inspectors Office are conducting a joint investigation into the incident.

This is a tragic accident possibly caused or at lease exasperated by the fact that the crane was being driven downhill on a narrow bumpy track with its boom partially extended, suggested a lack of training may have played a part?

One hopes that the facts of this case will be made public in the not too distant future. All too often users treat a large Rough Terrain crane along the same lines as much smaller, simpler equipment with employees operating or moving them when they have had minimal to no training.

This may or may not be the case here and other factors may have caused the desperately sad event. The only thing we can hope for now is that others learn from the loss of this man’s life.