The investigation into the upending of a mobile crane at the Tate Modern gallery in London last month has identified human error as the likely cause, with the wrong basic data possibly entered into the crane’s computer. 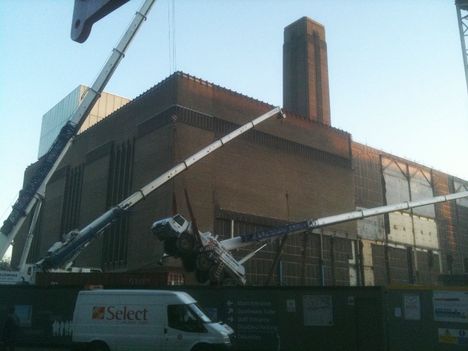 Nobody was injured in the accident on 1st December 2011 and the crane came to rest on two steel columns, preventing it from overturning. However, it has prompted demolition contractor McGee Group to publicly share its findings from the ongoing investigation, reports Demoliton News.

A statement from McGee said: “On the evening of Friday 1st December on a major project in London, a 130-tonne Tadano Faun ATF110G-5 mobile crane supplied by Baldwins Crane Hire, up–ended and came to rest on two steel columns.

“Fortunately nobody was injured and no major damage was sustained to either the crane or any element of the structure. The investigation is still ongoing, however early indications have revealed that human error was a main contributory factor.

“A number of issues have been raised which relate to the inspection regime in respect of the crane rigging and the inspections carried out before the crane went to work.

“Our initial investigations have revealed that there is no fail safe device fitted beyond the LMD to capture wrongly entered data, as a consequence if the wrong counterweight detail is entered and exceeds that which has been actually installed, the audible and visual warning devices will not activate.

“Both the crane supplier and ourselves have been in contact with several crane manufacturers and are alarmed to discover that this would appear common place.

“To ensure that the crane operator enters the correct codes into the LMD to identify the actual counterweight fitted, it may be necessary to amend your procedures i.e. pre-use check sheets to include a provision for secondary sign off.

“McGee personnel can refer to our safe operating procedures (lifting operations) which is available on our Livelink management system, for guidance on the new requirement.

“One manufacturer has advised that there are various options available at ‘point of sale’ that can be installed such as outrigger length measuring devices and ballast sensors, but current EU regulations do not require this.

“We intend to discuss with the HSE changes required in the regulations to enforce the requirement for ballast sensors on all mobile cranes going forward.

“As previously stated, this investigation is still on-going and if any other pertinent information comes to light, we will advise accordingly.”