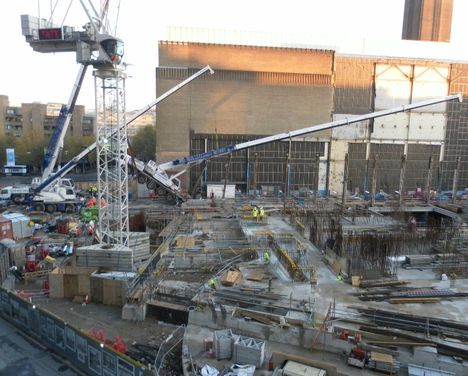 The company responsible for the work being undertaken by the crane that tipped at Tate Modern last month – McGee Demolition – has issued a statement and guidance for use by its site staff, subcontractors and suppliers.

“On the evening of Friday 1st December on a major project in London, a 130 Tonne Tadano Faun ATF110G-5 Mobile Crane supplied by Baldwins Crane Hire, up–ended and came to rest on two steel columns. Fortunately nobody was injured and no major damage was sustained to either the crane or any element of the structure. The investigation is still on-going, however early indications have revealed that human error was a main contributory factor.”

“A number of issues have been raised which relate to the inspection regime in respect of the crane rigging and the inspections carried out before the crane went to work. The purpose of this alert is to raise the awareness on a matter relating to load moment device. Our initial investigations have revealed that there is no fail safe device fitted, beyond the load moment device to capture wrongly entered data, as a consequence if the wrong counterweight detail is entered and exceeds that which has been actually installed, the audible and visual warning devices will not activate.”

“Both the crane supplier and ourselves have been in contact with several crane manufacturers and are alarmed to discover that this would appear common place. To ensure that the crane operator enters the correct codes into the load moment device to identify the actual counterweight fitted, it may be necessary to amend your procedures i.e. pre-use check sheets to include a provision for secondary sign off.”

“McGee personnel can refer to our safe operating procedures (lifting operations) which is available on our Livelink management system, for guidance on the new requirement. One manufacturer has advised that there are various options available at ‘point of sale’ that can be installed such as outrigger length measuring devices and ballast sensors, but current EU regulations do not require this.”

“We intend to discuss with the HSE changes required in the regulations to enforce the requirement for ballast sensors on all mobile cranes going forward. As previously stated, this investigation is still on-going and if any other pertinent information comes to light, we will advise accordingly.”

The company has suggested that it intends to share this information widely within the industry for the benefit of all, however so far this statement has had relatively limited circulation.

McGee is correct in that generally speaking mobile cranes are not fitted with counterweight detectors linked into the load moment indicator, although an increasing number are becoming available with outrigger position sensors and this will eventually become standard equipment.

The fact that the load moment indicator is only as good as the data programmed into it, should not have come as a surprise to anyone. Any site staff that had received even the most basic training on working with cranes would have been well aware that this is the case. They would also be aware that when a little extra capacity is required it is not unknown for an operator to be persuaded to cheat the system by programming in a larger counterweight that that which is installed, in order to save time and cost bringing in an slice of counterweight or relocating the crane. Site managers who are regularly involved with lifting duties are as aware of this as any one and they are often the instigators.

The fact is, any decent operator that knows his crane is unlikely to make an error programming in the wrong counterweight, he knows full well what he brought with him on board and full well how much or little of it he installed. Even if he managed to programme it in incorrectly, most -if not all, systems will provide a visual indication of the counterweight he has input.

While fitting a sensor system is not a bad idea in principle, it can be complex in practice and any change in the regulations would take an exceptionally long time to make any impact whatsoever in the market. Especially when the prices contractors like McGee are currently paying for crane rental simply do not cover the cost of acquiring new cranes that might eventually incorporate such devices.

A far more practical solution would be to pay a sustainable rate for the crane and to put an absolute stop on site managers applying pressure on crane operators to squeeze a little more out of the crane in order to complete a lift ‘here and now’.

Hopefully this statement including the suggestion – but not an insistence – that this factor becomes an item on the pre-use check sheet, will play a part in helping prevent this sort of accident happening again.