“Well, once we saw it, we saw that the horse was pretty big, and we came up with plans B, C, D, E and F,” Mohr said. Firefighters called in four engines and a special unit with a strap. 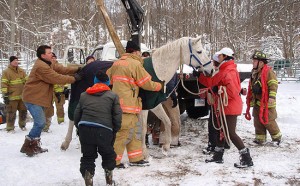 Amid countless snow-related calls Sunday, Milford fire officials received one of their more unusual requests: Could they help a horse get to its feet?

The owners of a horse, more than 30 years old, called the department about 8:30 a.m. after the animal had been on the ground for at least four hours. Battalion Chief Richard Mohr and a few other fire officials went to 1022 West River St. to assess the situation. Once the horse was upright, he was lifted with a crane owned by an off-duty firefighter.