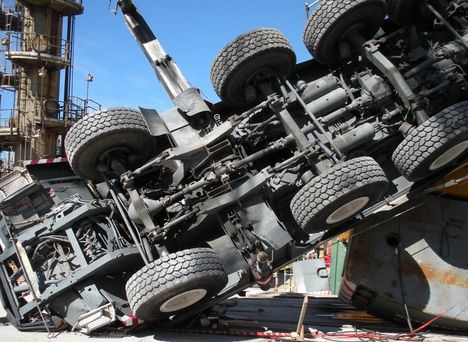 A 240 ton All Terrain crane went over late last week at a Chevron Refinery in Pascagoula, Mississippi, due to a lack of communication and full walk around daily inspection. The initial reports state that the crane’s outriggers had been retracted on the left hand side of the crane by a second shift, in order to take them out of a roadway during the night. When the day operator arrived the following morning he got in crane cab raised the retracted boom and with counterweight over the retracted outriggers the unit tipped over backwards.  Assuming that the reports we have been sent are entirely accurate, it would seem that a brief walk around inspection of the crane would have highlighted the problem and almost certainly avoided the accident. As far as we know no one was injured.