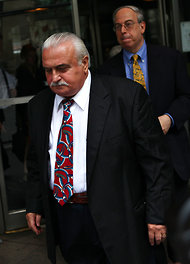 A mechanic who ordered a critical part for a tower crane that collapsed on the Upper East Side four years ago, killing two workers, avoided jail time on Tuesday under the terms of a plea bargain.

The mechanic, Tibor Varganyi, bought the part from what prosecutors said was an obviously unqualified company in China. His plea bargain to criminally negligent homicide last year allowed him to avoid a possible 15-year prison sentence in exchange for testifying at the manslaughter trial of his former boss, James F. Lomma, the owner of New York Crane and Equipment Corporation. Mr. Lomma was acquitted of manslaughter and other charges in April.

But the families of the two men who died — Donald C. Leo, 30, and Ramadan Kurtaj, 27 — attended Mr. Varganyi’s formal sentencing in the hopes of persuading Justice Thomas A. Farber of State Supreme Court in Manhattan to send him to prison.

“The defendant sits here claiming to have told the truth and asks for a pass on the fact that his actions and inactions caused my son’s death,” Mr. Leo’s mother, Maria Leo, said. “I am not convinced he ever revealed all the details about what exactly happened between him and his boss Lomma when ordering the part from China.”

Xhevahire Sinanaj, a cousin of Mr. Kurtaj’s, criticized Mr. Varganyi for not finding a competent manufacturer and failing to respond when evidence arose that parts from the company were flawed.

“Only someone who cares nothing for a human being could do such a thing,” she said. “You and Lomma let these deaths happen.”

Mr. Varganyi testified during Mr. Lomma’s trial that he had ordered the parts from the Chinese company, RTR Bearing Company Ltd., at Mr. Lomma’s direction, to save time and money.

Mr. Varganyi found RTR on the Internet and began corresponding via e-mail with a representative, Joyce Wang. Many of the e-mails filed as evidence in Mr. Lomma’s trial showed Mr. Varganyi, whose formal education ended in the ninth grade in Hungary, and Ms. Wang struggling with English and complex measurements.

In one message, Ms. Wang expressed doubts to Mr. Varganyi that her company could handle a weld that played a role in holding the turntable atop the crane tower: “And honest speaking we don’t have confidence on this welding.”

The first piece that RTR completed was mounted on the crane that collapsed on East 91st Street on May 30, 2008. After flaws were found in another part that RTR supplied, Mr. Lomma’s company did not check for problems with the part that was then in service on 91st Street.

At his sentencing, Mr. Varganyi stood and turned to the families of Mr. Leo and Mr. Kurtaj. He apologized for the deaths of their loved ones and for not being able to express his sorrow fully in English.

“I did not mean to hurt anyone,” he said.