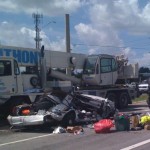 The Hillsborough Sheriff’s Office, Thursday, released dramatic video of a crane crushing a deputy’s squad car in a chain reaction accident last week. The images of the accident at Hillsborough Avenue and 56th Street were captured by a security camera aboard a HART bus. The bus was also involved in the accident. Deputy Deborah Walker was seriously injured in the wreck. She remains hospitalized at St. Joseph’s Hospital. “She (Walker) is improving,” said sheriff’s spokeswoman Crystal Bermudez. “She’s out of intensive care, but she still has a long way to go.” It was originally believed the accident was caused when the brakes on the crane failed. However, Bermudez said deputies are still investigating and have not determined the cause of the wreck.