As investigators seek the reason for a catastrophic crane accident on the West Side of Manhattan last week, a battle is raging over efforts to change the licensing of crane operators who labor high above the streets. 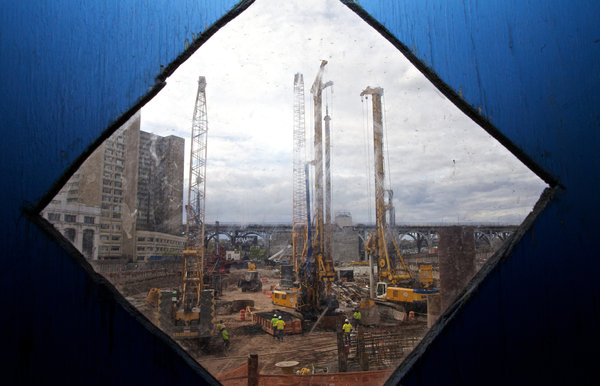 The city, at the urging of the real estate industry, has proposed adopting a national license and more stringent requirements for workers operating the big cranes that swing across the skyline with loads of up to 115 tons.

The union that represents crane operators opposes the changes, arguing that New York’s dense urban environment demands local experience and city-administered testing. The union and its supporters have submitted their own bill to the City Council, setting up a potential showdown with Mayor Michael R. Bloomberg.

But the squabbling over new licensing has as much to do with labor-management strife as it does with ensuring public safety. The union, Local 14 of the International Union of Operating Engineers, has consistently defied demands from developers for concession packages known as project labor agreements, or P.L.A.’s.

The dispute could also pose a quandary for Christine C. Quinn, the City Council speaker, who plans to run for mayor; she may be forced to choose between the construction trades and the real estate developers, both of which can offer political and financial support.

A year ago, the developer Stephen M. Ross of Related Companies and other members of the Real Estate Board of New York pressed city officials to adopt national licensing for the tower cranes used to build skyscrapers. The developers acknowledged that they were motivated by a desire to break the hold of Local 14 on crane jobs, as well as by safety concerns.

Union officials contend that New York City has the highest standards in the nation for licensing crane operators. Since Manhattan is the densest urban environment in the nation, they say, a national license does not qualify a crane operator from, say, Omaha, to operate here.

“It is unconscionable,” said Jon R. Del Giorno, a spokesman for Local 14, “that this administration is prepared to simply give up that control, putting dollars ahead of the safety and security of millions of New Yorkers, at the request of real estate developers.”

In the crane accident on April 3, in which one worker was killed, investigators have focused on defects in the hoisting system, which may have caused a steel-wire cable to snap.

In response to questions last week about the accident, Mayor Bloomberg chose to focus on the licensing issue.

“One of the unions is violently opposed to our crane operators that work here taking a national test, something that we think makes an awful lot of sense, given the diversity of the kinds of cranes here and the fact that people should be able to come here and work without getting tied in just to the local,” he said.

Edwin L. Christian, president of Local 14, returned the mayor’s volley several days later, telling The New York Post that Mr. Bloomberg was in cahoots with “his super-rich developer friends” to attack the union.

Although the Bloomberg administration has long favored a national license and increased training requirements, it has been slow to move. The city requires three years’ experience under a city-licensed crane operator, and virtually all licensed operators belong to Local 14.

“This is a union that has never signed a P.L.A. and doesn’t have an apprenticeship program,” said Steven Spinola, president of the Real Estate Board. “There’s a lawsuit over their discrimination. Why would we continue to allow this union to dictate who can operate a crane in New York?”

Three years ago, previous leaders of Local 14 came under fire for their ties to organized crime. A corruption monitor was appointed to oversee the local in 2009 after two federal racketeering cases resulted in prison terms for most of the local’s leadership.

Robert D. LiMandri, the city buildings commissioner, finally issued proposed rules in December that would meet national standards, requiring a 40-hour course on city regulations and three years’ experience on large cranes under a licensed operator, with at least two years in New York or another urban area of comparable density. The city has yet to identify comparable urban areas. A hearing followed in February.

“We know that New York is a uniquely dense environment, and the goal is to have the best-qualified, best-trained people operate the most safely,” Deputy Mayor Caswell F. Holloway IV said. “This is about public safety, first and foremost. Having one element of the requirements be a test that is nationally accredited is not inconsistent with local oversight.”

In recent months, city officials have met with developers, union officials and staff members from Ms. Quinn’s office in an effort to find a compromise that would include local experience and a national license. The Real Estate Board opposed the compromise, and Local 14 balked, saying the city should continue to do the testing.

“It’s a ploy to destabilize the union,” Delroy Danvers, a crane operator, said. “The city’s tests and procedures are among the most difficult you encounter anywhere in the United States.”

But Gary LaBarbera, president of the Building and Construction Trades Council of Greater New York, a union group, is seen as more amenable to the changes, according to officials involved in the talks. Mr. LaBarbera denied late Wednesday that he had agreed to the compromise. And Mr. Holloway said in an interview this week that he was putting “the finishing touches” on the new regulations.

“Our primary concern is the safety of workers and the public,” Ms. Quinn said. “Our goal is to strike the appropriate balance that achieves the highest possible safety standards.”