A midday construction accident on the new Bay Bridge east span Thursday toppled a crane with a 160-foot boom, sending it and part of a temporary steel trestle that was being removed plunging toward the bay. 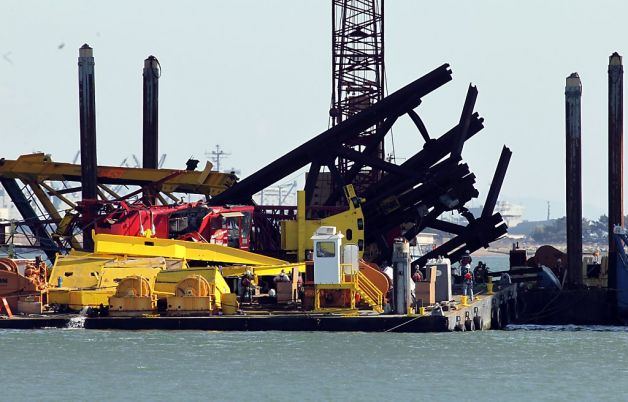 No one was injured and no oil spilled in the accident, which occurred when one of two large ringer cranes, which were attached to the barge and reached to the underside of the new bridge, tipped over at 12:15 p.m., said Andrew Gordon, spokesman for the Bay Bridge project.

The cranes were working in tandem on the north side of the bridge, just east of the span’s lone tower, using a steel lowering frame to remove a section of the steel structure that had supported the deck of the bridge’s signature span until the tower was assembled and the suspension cable installed.

Positioned at opposite ends of the 88-foot-by-99-foot barge, the cranes were lifting the steel segment from its ends when it slipped loose from the lowering frame and fell to the barge, pulling one crane with it. The steel crashed to the deck of the barge, piercing one section of it and sticking into the bay, Gordon said, though no steel fell into the bay.

The accident occurred beneath the single-tower suspension span where crews have been working for a month to remove a rust-covered temporary support system that was installed in 2009 while the steel bridge deck was being assembled. But as of November, the bridge has supported itself, so construction crews are removing the now unneeded support structure.

“Nothing happened that would affect the integrity of the structure,” Gordon said.

Construction on the span was suspended after the accident, Gordon said, but is expected to resume Friday. However, the dismantling of the temporary trestle will stop while the accident is investigated. John Goodwin, a spokesman for the Bay Area Toll Authority, a toll bridge oversight agency, said the removal of the temporary supports is not critical to the opening of the $6.3 billion bridge, scheduled for Sept. 3.

American Bridge/Fluor, the contractor building the span, and the Coast Guard will cooperate on an investigation, Gordon said. The Occupational Safety and Health Administration, which looks into workplace accidents, could also investigate.